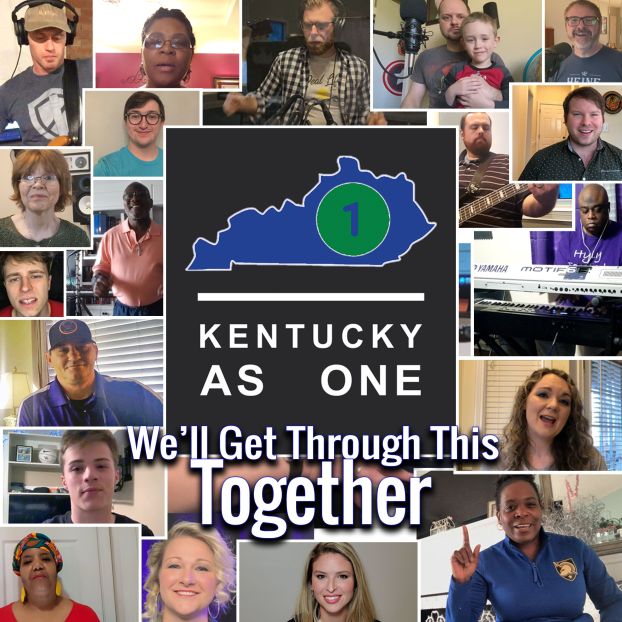 “We Will Get Through This Together,” a song video several people from Winchester were involved in making, got a big boost when it was featured on Gov. Andy Beshear’s 5 p.m. TV briefing Monday.

The song, meant to inspire and uplift Kentuckians in the fight against the coronavirus, was the work of more than 20 vocalists, musicians, sound engineers, videographers and others.

“We have a pretty special closing video for you,” the governor said as he introduced the recording at the end of his newscast on the major commercial television networks in the state. “It’s a compilation by some artists here in Kentucky trying to celebrate and bring us together, knowing that we’ve still got a lot of work to do.”

“I was pleasantly surprised,” said Nate Jackson of Winchester, who had a hand in making the recording as a singer, songwriter and keyboardist.

He learned about it from Erika Gaines of Winchester, who is a church music minister, as he is.

“I got a message from Erika that people were blowing up her phone!” he said.

Jackson said those who collaborated on the video had hoped the governor might air it on Kentucky’s TV channels.

“I was happy to see the comments when it was played that people really enjoyed it,” he said.

They also got many comments on their Facebook page from people who said they were “touched by it.”

“One person said he listens to it all the time now,” Jackson said.

The musicians posted the NBC affiliate WLEX’s recording of the video on their Facebook page, Kentucky As One, but it was cut short during the newscast.

The best way to watch the video, he said, is to go to the governor’s website, governor.ky.gov, because it has Beshear’s sign language interpreter for the deaf and hearing impaired, Virginia Moore, signing along with the song lyrics.

The video was made by people from all over Central Kentucky, including several Clark County residents and former residents — songwriters Jeff Everman, Bob Stamper, Gaines and Jackson; and singers Trish Torline, Bryan McKinney and Stephanie Jackson. Stamper was also the recording engineer, and Winchester filmmaker Jason Epperson handled the video editing with the help of Zachary Sutherland.

Gov. Andy Beshear issued a scam alert this week warning Kentuckians of utility-related scams popping up in the midst of... read more