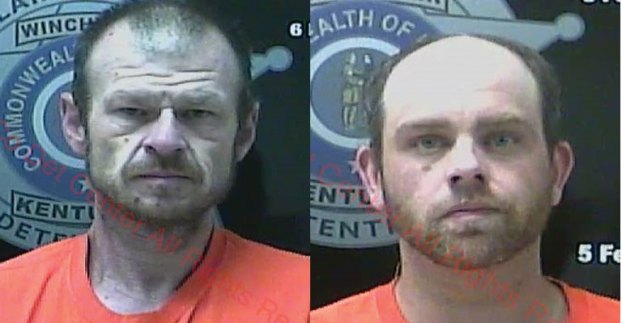 Two charged with burglary for taking guitar, other items

Police charged a pair of Winchester men with breaking into a home and stealing a $10,000 guitar and other items.

The guitar was only one item taken, according to Winchester Police, along with $1,200 in quarters, hunting bows and multiple firearms.

According to court records, officers were called to a residence on Village Drive at 9:17 p.m. Tuesday after the homeowner returned and found someone had broken in and taken a number of things.

While officers were on the scene, a witness said she received a message from a person on social media about selling the guitar. Police found the person, identified as Eric Brown, who later told police he had other property as well as the guitar from the residence.

Brown said James Adkins participated in the burglary, and helped him remove a duffel bag of firearms from the house as well.

Adkins told police they entered through the garage door, which they pried open. Adkins said they grabbed everything they could including a bag full of quarters valued at $1,200.

Officers also said the back door and the lock were damaged as well. A1

Brown, 34 of 16 Kittson Drive, and Adkins, 41 of 205 Mutual Ave., were both charged with first-degree burglary and possession of a firearm by a convicted felon. Both were lodged in the Clark County Detention Center.

“We Will Get Through This Together,” a song video several people from Winchester were involved in making, got a big... read more