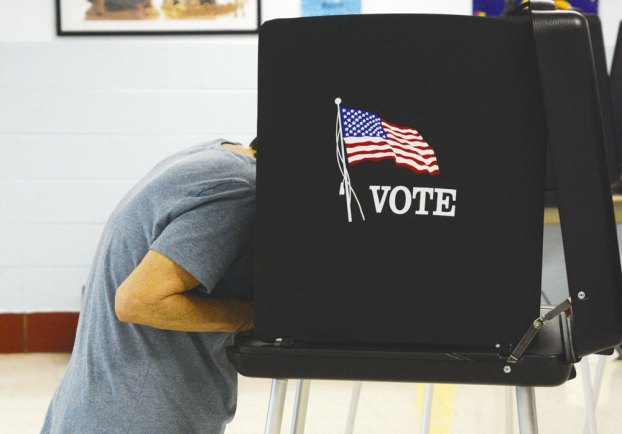 A voter casts a ballot for the May 2018 primary election. (Photo by Lashana Harney)

The primary election is going to look different this year.

Clark County Clerk Michelle Turner said there will likely be only one actual voting precinct open this year. Everyone else is being encouraged to vote absentee or submit their ballots by mail.

Absentee voting is scheduled to begin June 1, and will be by appointment only, she said.

State officials are only allowing one voting precinct to be open, Turner said.

The state is funding four election officials to work throughout June to handle absentee voting as well as mailing and preparing the ballots for Clark County voters.

The change also led to the County Clerk’s Office using the Fiscal Court room for the month of June.

Turner said the four workers have to have enough space to maintain social distancing as well as for two voting machines. It must also be secure, as the ballots will be stored there, and have internet access, she said.

The courtroom is the only space in the courthouse that would be suitable.

There was an option to use an off-site space, she said.

The state also requires the poll workers and absentee voting to be in a separate space from the County Clerk’s office, in case one of the clerks becomes sick with COVID-19, she said.

The magistrates voted unanimously for the change, but were not happy about it.

Several magistrates said Thursday they have been receiving public pressure to resume in-person meetings where the residents can attend and comment.

“My thought was if this is what you need … let’s do it,” Clark County Judge-Executive Chris Pace said during the meeting Thursday. “I feel like (the magistrates) want to make that call, so I’m going to let you make that call. I want to accommodate Michelle.”

Magistrate Greg Elkins suggested finding another site for Fiscal Court meetings that would allow the public to attend.

“I think the uncompromised election is a little more important than more meetings without public comment, though I don’t want to,” Elkins said.

Though the primary is June 23, the results won’t be final for several days later.

Turner said the last day to accept ballots is June 29, though they must be postmarked by June 23.

The Clark County Health Department has reported a big spike in the number of COVID-19 cases in the county as... read more