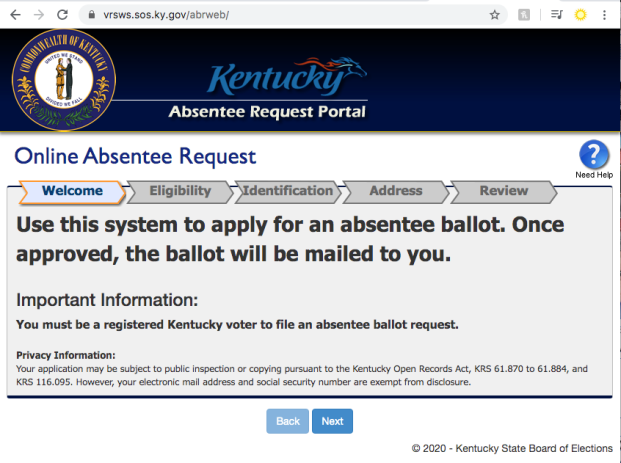 Voting by mail option for all

That’s because state officials are assuming that in a time of pandemic, most voters will be absentee voters.

“For the first time,” said Clark County Clerk Michelle Turner, “you don’t have to put a reason why you’re requesting a ballot.”

Normally, she said, people request a vote-by-mail ballot because they’re planning to be out of the county, they’re pregnant or planning to have surgery, or they are students who are residents but will be away at college.

Because having many voters gathered together at polling places presents a risk of spreading the virus that can cause serious illness or death, Kentucky Secretary of State Michael Adams and Gov. Andy Beshear in April agreed to allow voting by mail to be an option for every voter.

But it won’t be the only option.

Registered voters can still go to a polling place, but there will be just one.

Turner has requested that the one location be Campbell Junior High School at 620 Boone Ave., but that has not yet been confirmed by the State Board of Elections.

She has also called on the National Guard to help with crowd control — to make sure people stand at least six feet apart, go out one door and come in the other, and follow other state guidelines to avoid spreading the virus — but she hasn’t gotten an answer yet.

Another option, as always for those who were going to be absent, will be to vote on a voting machine at the courthouse prior to the election. This time, though, it will be by appointment only to limit the number of people present at any given time.

The state had already postponed the primary until June 23 because of the novel coronavirus.

“It was supposed to have been yesterday,” Turner said Wednesday.

State officials thought holding the election later might give time for the virus to subside, but it hasn’t. Tuesday was the deadliest day yet in Kentucky for COVID-19, the disease caused by the virus. Beshear announced at his 5 p.m. briefing that 20 people had died of the illness, and there were 164 new positive tests for the virus, bringing the total for the year to 8,069. In Clark County, the 35th positive case was announced that day.

Those who want to vote by mail may call the Clark County Clerk’s Office at 745-0280, extension 3, and request an application for a ballot, which must be signed, dated and mailed to the office. They will then be mailed a ballot within three days.

Sometime around May 25, the State Board of Elections will mail postcards to every resident with instructions on how to vote by mail by filling out an online application for a ballot, which will then be mailed to them.

“If they would wait about a week and a half, it would save them a little bit of money and time,” Turner said. “They would get one piece of paper from us, and for the first time ever, they could either hand-deliver that back in, or we will have a postage-paid envelope on there, so they won’t be out the postage.”

There will be a poll worker sitting outside the courthouse for people who want to bring their ballot in and drop it in the box themselves.

All ballots mailed in must be postmarked by June 23 at 6 p.m. to be counted.

Absentee voting at the courthouse will begin at 10 a.m. June 1, and voters will need to call the County Clerk’s Office at 745-0280, extension 3, and request an appointment. There will be appointments scheduled every 10 minutes.

For those who go to vote in person on June 23, the polling place will be open from 6 a.m. to 6 p.m. Election workers must all wear masks, and voters are asked to do the same, but Turner said she doesn’t know if she can enforce it. That’s a question she will ask the state board.

Turner said the state has told county clerks to plan for a 50 percent turnout at the polls, even though the percentage of registered voters who vote in the primaries is usually lower than that, and this year, the Republican and Democratic presidential nominations are a foregone conclusion. It will be President Donald Trump for the Republicans and former Vice President Joe Biden for the Democrats.

There will also be some state and local contests on the ballot, including those for U.S. House and Senate, state representative, public school board and soil conservation officers.

In the 2016 primary election, 5,586 people voted, and 139 of them, or 3.38 percent, were absentee voters. However, that year, Republicans had a presidential caucus on a different date, so the primary was only for Democratic presidential voters and those voting on other races.

Election results must be certified by June 30.

May 26 is the last day to register to vote in the primaries, but the deadline for changing one’s party registration was Dec. 31, 2019.

Turner said she thinks more people will show up to vote on June 23 than mail in their ballots, based on what she’s hearing from voters. But that’s not what state officials want, she said.

“They’re encouraging everyone to do mail-in so you do not have to stand in line,” the clerk said. “They’re really pushing that.”