CONDLEY: Blackberry cobbler is easy, but also a little tart

On Memorial Day, Brad fired up the smoker he gave me for a birthday gift several years ago.

We don’t use the smoker often, but had no other plans for the holiday, and figured it was the perfect time to smoke lots of meat.

We’d have our choice of pork shoulder, pork ribs or chicken for supper, and then we’d put what we didn’t eat in the freezer for an evening when neither one of us wanted to cook.

While Brad was manning the smoker, I looked through recipes to see if I could find something quick to make for an after-supper dessert.

I’d just started looking through the stack of recipes when I found one for a quick blackberry cobbler.

We have blackberries in the freezer and the recipe sounded super easy — perfect. 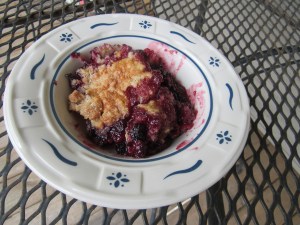 Preheat oven to 375 degrees.  Place four to five cups of fresh blackberries in a lightly greased eight-inch square baking dish, and sprinkle with one tablespoon of lemon juice.

Stir together one large egg, one cup of sugar and one cup of all-purpose flour in a medium bowl until mixture resembles coarse meal.  Sprinkle over fruit.

Drizzle six tablespoons of melted butter over topping.  Bake at 375 degrees for 35 minutes or until lightly browned and bubbly.  Let stand 10 minutes.

Garnish with fresh mint sprig, if desired. Makes six servings.  For a neat presentation, bake for the same amount of time in six (eight-ounce) ramekins on an aluminum foil-lined baking sheet.

The recipe calls for fresh blackberries, but all I had to do was thaw a bag (I freeze them by the quart, which is four cups).

The chicken came off the smoker first, and as it rested, I began to put dessert together.

I greased a square baking dish then dumped in the blackberries.

I was a little concerned about this recipe because it does not call for adding sugar to the fruit.  Wild blackberries can be tart, but I figured the recipe’s author knew what they were talking about.

I sprinkled the berries with a little lemon juice, and then put the topping together.

It doesn’t get much easier than combining a cup of flour and a cup of sugar then mixing in an egg until the mixture is crumbly.

I sprinkled it over the berries, and then melted the butter in the microwave.

After 20 seconds, I was drizzling the butter over the top of the cobbler’s crust and into the preheated oven it went.

I set the timer for 35 minutes, and went to check on Brad and the smoker.

He said it was almost time to remove the ribs, and I headed inside to finish getting the rest of supper ready.

We had a salad made from the lettuce and spinach I’d picked from our new raised-bed garden that morning, green beans I’d canned last year and a baked potato we’d added to the smoker a couple of hours before.

I headed back outside to help Brad get the ribs out of the smoker, covered them while they rested, and we sat down to eat our salads.

Midway through eating our salads, the timer sounded.  I checked on the cobbler, and it wasn’t brown yet, so I left it in the oven while we ate.

After the salads, we decided we’d have ribs for supper and re-heat the chicken the following evening.

I checked on the cobbler, and it was just barely brown, so I let it continue baking.

We filled our plates, and I decided to check on the cobbler before I dug in.  The crust was a pretty golden brown, and I set it on the counter to cool while we ate.

The ribs were delicious, along with the potatoes and everything else that evening.

After cleaning up the kitchen, Brad was out checking the smoker for the last of the meat, the pork shoulder.

I asked Brad if he wanted some cobbler, and he said he did and  asked if we had ice cream.  We had a little, just enough for each of us to have a scoop with the cobbler.

I told him the recipe didn’t call for any sugar in the filling, but did have it in the topping.

I agreed. It was a little tart, but with the ice cream, I didn’t mind too much.

When Brad was finished, I asked him if he thought it was a nailed it or failed it. He said failed it because it wasn’t sweet enough.

Most of you know by now that Brad isn’t a sweet eater, so when he says it wasn’t sweet enough, you know it really isn’t sweet.

He did like the crunch of the topping and thought that was the best part of the dessert.

I told him I thought with a little sugar on the berries, it would be a really good cobbler.  I guess the ice cream made it taste sweeter to me.

Brad took a sample to Sandra, his physical therapist, and she said it was a definite nailed it recipe.

I’d say this recipe is a nailed it when it came to being easy, as the title said; but a failed it because of the filling not being sweet enough.

Of course, that’s because of the fruit I used, so don’t hesitate to give this recipe a try, just use sweet blackberries.  Maybe you’d like to try another sweet fruit instead.  You be the judge.

It won’t be long until our blueberry bushes will be providing fresh berries. We still have a lot in the... read more