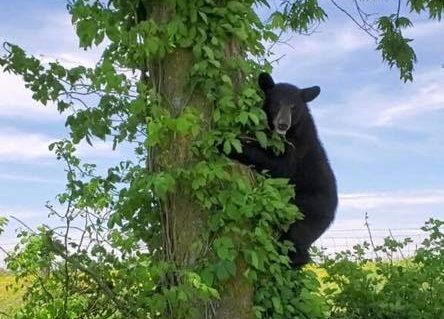 Ben Webb got an unexpected and unusal visitor on his family’s farm at Pine Grove Wednesday — a small black bear.

“We were setting tobacco when one of the guys saw it,” he said. “He kept hollering, ‘Bear!’

“I thought maybe he saw a big coyote,” he said. But then he saw it himself.

“Sure enough, it was a bear. I couldn’t believe it,” he said.

“It ran right up next to where we were, on the opposite side of the fence,” until one of the workers shouted at it, and then it turned and ran the other way, he said.

Later, one of the farm workers saw the bear climbing a tree near Todds Road and got a picture of it with his phone.

The sighting was about a mile, he said, from Graze, a restaurant in what was once an old country store in Clark County, but on the Fayette County side of the line.

The Webbs lease a 2,400-acre farm in Clark and Fayette counties that runs from Combs Ferry to Cleveland roads near Colby Road and Todds, where they raise tobacco, corn, soybeans and beef cattle.

Ben said his father, Benny Webb, has lived there for 50 years and has seen some unusual wildlife, including a bald eagle and coyotes, and there have even been bobcats, but never in a million years would they have expected to see a black bear in that area, which is mostly pasture and cropland and only a few miles from the Hamburg Pavilion shopping mall.

John Hast, a biologist for the Kentucky Department of Fish and Wildlife Resources and an expert on black bears, said this one is a young male that has been seen ranging over a broad area in Fayette County.

He was first reported Tuesday running across a softball field near an industrial area on Athens-Boonesboro Road, and then Wednesday, he was spotted on Todds Road. Thursday, he was seen in the vicinity of Riviera Road near Winchester Road.

Young males, Hast said, travel far in early summer because it’s breeding season, and the big, dominant males will kill them if they don’t “get out of town.”

They may also be looking for mates or a meal, he said.

Another factor is that the mother bears will run them off. It’s nature’s way of preventing inbreeding with young siblings.

Although black bears are becoming more common in Eastern Kentucky than they were years ago, it’s unusual to see one in the inner Bluegrass around Lexington, Hast said. The last one he can recall was around 2016 in Jessamine County on Taylor Made Farm, a thoroughbred operation.

“We get reports from Clark County every once in a while” of a black bear having been seen, Hast said, but there hasn’t been a confirmed sighting in a few years.

In June 2013, a black bear was hit and killed by a car in Clark County on Interstate 64.

William “Bo” Harris loves kids. It comes with the territory when you own a child care center, coach basketball and... read more