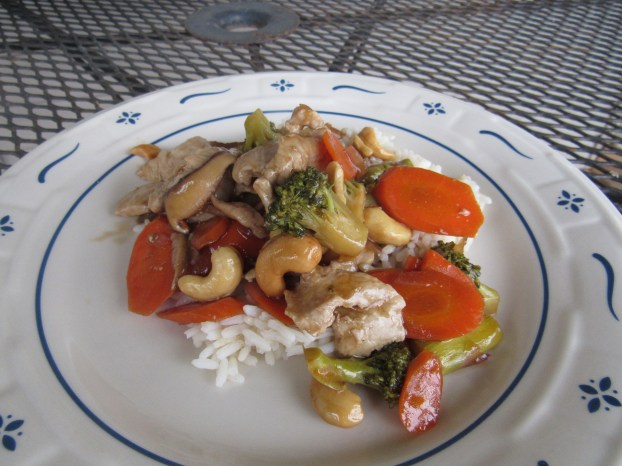 CONDLEY: Crunchy cashew pork has too much tang

This recipe for crunchy cashew pork came from the January/February 2000 issue of Quick Cooking magazine.

I could not believe I’d had the recipe so long before giving it a try.

Since it’s so old, you can imagine the stack of recipes that I’ve saved over the years.

In a large skillet or wok over medium-high heat, stir-fry pork in one tablespoon oil until no longer pink; remove and keep warm.

Bring to a boil; cook and stir for two minutes or until thickened. Return meat to pan and heat through. Stir in cashews. Serve over rice.

My favorite nuts are cashews, and this recipe sounded quick to prepare.

I began by prepping the ingredients — slicing the carrots, cutting up the broccoli and slicing the onions.

I typically buy pork loins when they are on sale, slice them into smaller portions and freeze for later.

Sometimes, I slice them into thick loin chops for grilling. That’s what I used for this dish.

Once thawed, I removed the fat from the chops and sliced them into thin strips.

When I prepared this dish, I started the rice first because it takes about 35 minutes from start to finish.

Next, I combined the sauce ingredients and set it to the side.

I don’t have a wok, so I used a large skillet to stir-fry the pork. You want to cook stir-fry on a medium-high temperature, not a low temperature, because you don’t want your meat to steam, which will make it chewy.

When the meat was done, I placed it on a plate and covered it with foil to keep it warm.

Next, I added the carrots and broccoli to the pan, and in no time, they were cooked to a perfect crisp tender.

I poured in the broth mixture, and it bubbled up. Next, I scooped in the sliced green onions.

As a surprise for Brad, I threw in a few sliced shiitake mushrooms. The mixture came to a boil, and once thickened, I slid the meat back into the pan. The meat re-heated quickly.

I removed the skillet from the stove and poured in the cashews.

The rice was done, and we were ready to eat.

Brad prayed, and we filled our plates, first with rice and topped it with the stir-fry.

Since I like cashews, I sprinkled a few more on top then dug in.

The first thing I noticed was this was pretty tangy, and Brad agreed.

I kept eating thinking maybe it was just that first bite, but the tang didn’t subside.

Brad liked the addition of the mushrooms.

I liked this dish except for the tang of the red wine vinegar. I don’t know if was just too much or what.

This recipe made plenty, and we decided we’d have it again the following evening, but I added some additional soy sauce before heating it to see if that would tone down the vinegar. It helped but not enough.

This recipe was quick, and I think it would have been really good if not for the tangy vinegar taste.

It’s a failed it in my book, and will not be added to my self-made cookbook.

CONDLEY: Blackberry cobbler is easy, but also a little tart

On Memorial Day, Brad fired up the smoker he gave me for a birthday gift several years ago. We don’t... read more