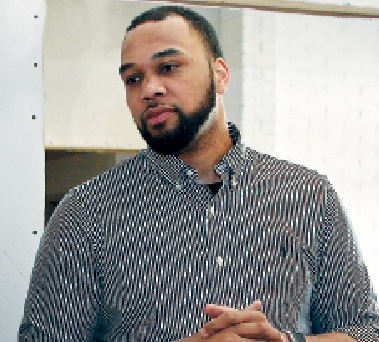 It comes with the territory when you own a child care center, coach basketball and serve as a foster parent for teens.

Harris, of Winchester, was as surprised as anyone when he won the national Best Foster Parent 2020 award from Transfiguring Adoption recently.

Harris and his wife, Elizabeth, have fostered for about four years, and estimated about 20 teen boys have lived in their home during that time.

“My wife has a big heart for helping kids,” Harris said. “She was doing (foster care) before we met. When I came into the house, we started with teen boys. Right now, we have three teen boys.”

With four biological children, it can make for a houseful.

Thanks to his foster children, Harris said, he is already a grandfather three times over … at age 34.

With the age of the children the Harrises foster, returning home is typically not an option, he said.

“A lot of times, these kids have been in the system,” he said. “A lot of times when they come to us, there’s no way to go back home.”

With a full house, there’s never a dull moment.

“It’s a daily challenge,” he said. “They’re like brothers so they challenge each other or they challenge me and Liz. We let them know we’re here for you and the greater good of you.”

Harris said he’s still in contact with a number of their foster children through their ups and downs in life.

“The best part is getting that appreciation, seeing the kid smile,” he said. “Two of my kids just got a job. They’re excited about having money in their pocket and getting a cell phone and paying for their phone.”

As part of the award, Harris and his family won a prize package including a trip to Disney.

Tears ran down Pastor Mike McCormick’s face as he shared why he was wearing a suit in the heat Wednesday... read more