BALDWIN: ‘North by Northwest’ comes to the Kentucky Theatre

Greetings, my fellow cinephiles of Winchester!

Its now June, and as we bounce back from the strangest six months this year has had to offer, take comfort in knowing that the treasured Kentucky Theatre is open and screening some great classics as the summer approaches.

Because of Hollywood postponing upcoming releases or opting to release via streaming markets, we lucked out in a way in that The Kentucky Theatre will be screening films from various studios’ archives. 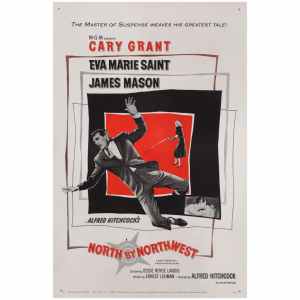 Before Roger knows it, he finds himself in a nightmare of Cold War espionage.

This case of mistaken identity thrusts him into abduction by two well-dressed armed suits, one played by a young Martin “Ed Wood” Landau, who transport him to an estate for interrogation by the villainous and velvet voiced Vandamm, portrayed by James “Lolita” Mason.

Roger’s pleas for clearing his name and clearing up the whole “Kaplan” confusion fall on deaf ears sending our sharp-dressed man on a life-or-death game of cat and mouse across the country.

It is the ultimate trip of survival via planes, trains and automobiles. All the while, Roger tries to to explore and bed (because he makes time for exercise) the seductive blonde Eve, portrayed by Eva Marie “On the Waterfront” Saint, who joined him on this adventure and matches our hero in clever dialogue laden with innuendos.

If you are new to Hitchcock, then do yourself a favor and spend these summer evenings learning the tricks of the trade by one of the masters of the visual yarn of suspenseful and comedic filmmaking.

“Northwest” was written by famed screenwriter Ernest “Who’s Afraid of Virginia Woolf?” Lehman, whose goal was to write this picture to end all Hitchcock pictures.

Lehman has accomplished just that.

If you are a novice to classic film, and have never seen “North by Northwest,” you might still be familiar with the scene of Cary Grant running through a cornfield from a crop duster trying to mow him down on the outskirts of Chicago. Sound familiar? You know the scene, now see the whole film.

Don’t let the social distancing guidelines, limited seating and masks deter you from taking the children to see some classics or from treating yourself to a nostalgic stroll down movie memory lane.

Don’t answer to a call for George Kaplan, and have a film-tastic day.

BALDWIN: I gotta a fever for film

Greetings, my post quarantine cinephile survivors of Winchester. Another week down, another week of changes. Selected establishments have been authorized... read more