CONDLEY: Chalk this French toast recipe up as a ‘failed it’

While shopping, I browsed the clearance section from the bakery and found a couple of packages of croissants for a decent price.

I put them in my cart thinking they would be delicious in some sweet dish.

That evening, while sitting on the couch and watching TV, I decided to go through the recipes I have for breakfast dishes and see what I could find using the croissants.

To my surprise I found two recipes I could make with the eight large croissants I had.

The first recipe I tried was this croissant French toast with pecans. 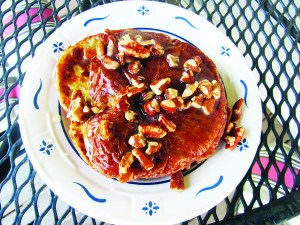 Cook 1/2 cup of chopped toasted pecans, 1/2 cup of honey and two tablespoons of butter in a saucepan until hot.  Keep warm.

Melt one tablespoon of butter in a nonstick skillet or griddle over medium heat.

I’d clipped this recipe from a magazine, but have no idea what magazine or what year I’d clipped it.

The picture that accompanied the recipe made my mouth water just looking at it.

Since we baked bacon earlier in the day, I decided we’d have French toast and bacon for supper.

I prepared the honey mixture first.

I toasted the pecans in the oven for about 10 minutes. When they were fragrant, I poured them into a small sauce pan and added the honey and butter.

I turned on the stove, and let the butter melt, heating until the mixture got hot.

While the honey mixture was heating, I poured the half-and-half into a medium-sized bowl, added the eggs and vanilla, and whisked everything until it was combined.

I started heating my non-stick griddle, and added some butter until it melted.

By now, the honey mixture was hot, and I turned the burner off under it.

I sliced four of the croissants in half, and added one half to the egg mixture, letting it absorb some of the liquid.

I managed to squeeze all eight croissant halves on the griddle and let them cook.

I’m not a big fan of French toast, mainly because I don’t like soggy (or as some call it, moist) bread stuff.  I just don’t care for the texture.

Since I love buttery croissants, I figured this was going to be the best thing ever and I’d have to keep an eye out for them on sale from now on.

When I was satisfied the French toast was ready, I called Brad to the kitchen.

I placed two halves on each of our plates, and we drizzled the honey-pecan mixture over each one of them.

Brad dug in first and said, “It tastes like French toast.”  I took a bite and agreed. The honey-pecan mixture tasted good on top, but no better than syrup would have.

To say the least, I was disappointed.  I just knew this was going to be the greatest French toast ever, and it wasn’t.

Frankly, I didn’t like the mushiness of it.  The bacon was the best part of our breakfast-for-supper meal.

The next morning, I placed a half slice into the toaster to see if it would crisp it up, and if I would like it any better than the night before. Brad had me do the same for him.

Even after adding the honey-pecan mixture, it was still not high on my list of things to eat.

Chalk this one up to a failed it. Next week I’ll tell you about the other dish I made using the remaining croissants.

CONDLEY: Crunchy cashew pork has too much tang

This recipe for crunchy cashew pork came from the January/February 2000 issue of Quick Cooking magazine. I could not believe... read more