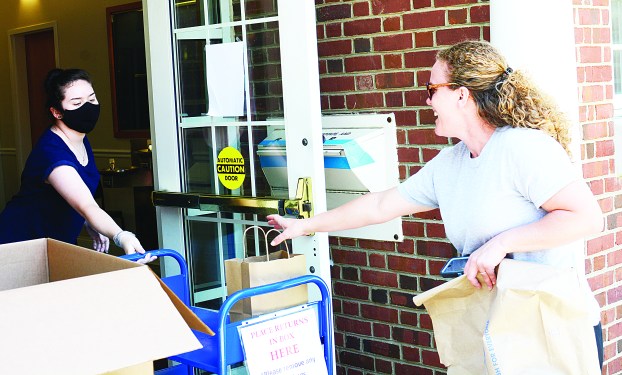 Jaleigh Cockrell of the Clark County Public Library, left, pushes a brown paper bag with books or other items outside the front door so that Kristin Tarry can pick them up after dropping off others she had borrowed. Within only a few minutes on Thursday afternoon around 3:30, several people drove up to the library to take advantage of its curbside delivery and dropoff.

It hasn’t yet been decided when the Clark County Public Library will reopen its doors to the public, but when it does, things are going to look a little different.

Library Director Julie Maruskin said the library will continue the curbside delivery of books, DVDs and other materials that began May 18 until at least June 25 and maybe later.

“In the next two weeks, we are assessing what phase we move to,” Maruskin said. “I evaluate the situation every day.”

“We hope to open as quickly as we possibly can,” she said.

Even before the novel coronavirus closed or limited in-person services for public libraries, books and other borrowed items were disinfected when they were returned, but now they are quarantined in cardboard boxes for nine days before they are sanitized, based on guidelines of the Institute of Museum and Library Services.

For the past month, from 10 a.m. to 5 p.m. Monday through Thursday, patrons have been able to order online and phone ahead to pick up books outside the library and return them on a cart.

“From the minute we opened the curbside service, people have been very receptive to it,” Maruskin said.

However, demand for digital products, such as books, movies and music online through programs such as Hoopla and ACORN TV has remained high.

“A lot of people didn’t realize how extensive the digital products available were” until they couldn’t come inside anymore to borrow items, she said.

Maruskin said many people also come to the library to use its public access WiFi, including students.

The director said she has noticed at least two families who come to the library almost every day to have lunch and use the WiFi.

As for allowing people back inside the library, however, Maruskin said, that will occur when she and the staff feel it’s safe. Public libraries have many older and other at-risk patrons who are more susceptible to becoming critically ill from the virus.

“We are very aware of trying to protect those populations,” she said. “That’s the real challenge for libraries.”

The governor allowed libraries to reopen June 8, but many haven’t.

Maruskin said that when the Clark County Public Library does reopen, there will be changes that will be noticeable.

As with department stores, the library will only allow a limited number of people inside at a time.

There will social distancing markers on the floor and at various places throughout the building.

There will be a limited number of computers available for use, but no study tables or areas to sit and read.

Staff members will be behind PlexiGlas shields, wear masks and gloves when interacting with the public, but visitors won’t have to be masked.

“We would love for people to wear a mask when they come in,” Maruskin said, but “that’s not something we feel is necessary” to require.

Maruskin said people who handle books and other materials will probably be asked to place them on carts for cleaning rather than returning them to the shelves, and she is considering self-check stations, but wants to make sure that doesn’t cause more problems.

“We’re having to take it very slowly,” the director said.

One of the innovative ideas the library started a couple of years ago and will likely expand is the scheduled delivery of subscription boxes. Patrons would be able sign up for and get delivered one day a month up to 40 items based on their tastes.

“It’s sort of like the old-fashioned milk delivery. You just exchange the tote,” said.

Clark County has had 80 cases of COVID-19 as of Wednesday. The Health Department reported that at 5:10 p.m. June... read more