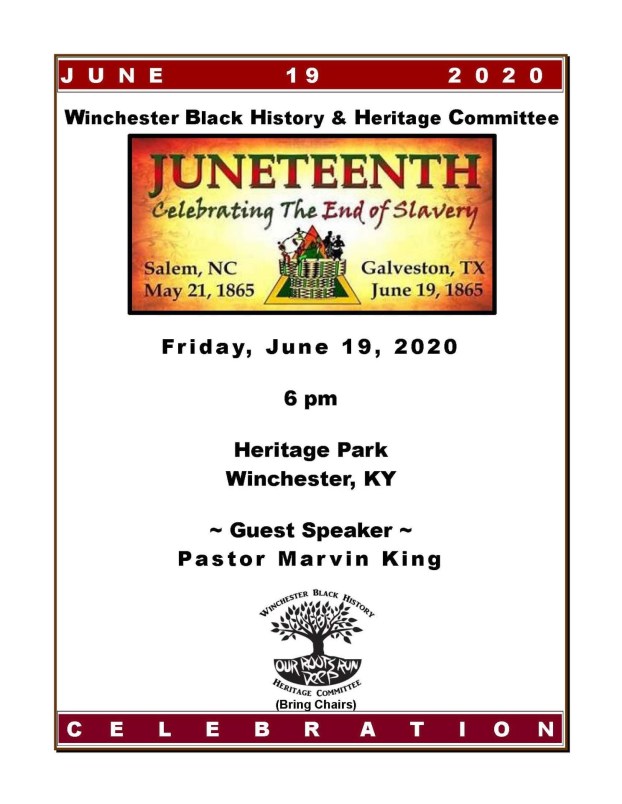 Better Together Winchester and the Winchester-Clark County Black History and Heritage Committee are joining for a pair of events to protest the current racial tensions and to mark the end of slavery.

The events will be Friday, June 19, in downtown Winchester.

Better Together Winchester member Becky Farmer said there will be a peaceful, silent march from the Clark County Courthouse to Heritage Park. The march will begin at 5 p.m., and the Juneteenth celebration will begin at 6 p.m.

Farmer said the idea for the march came from a June 3 Better Together Winchester meeting.

“We talked about how we need to change the narrative in Winchester,” she said. “We talked about the need for conversation and civil engagement, which are the heart of our mission.”

The matter was settled June 8, and planning has been in earnest since.

The Together for Justice March will be open to all and will be family friendly, she said. People are encouraged to bring signs, but the march itself will be silent, she said.

“The number of people and signs will speak for us,” Farmer said.  “I feel this is the time to move.”

People will start gathering at 5 p.m. and are expected to begin marching around 5:30 p.m., she said.

The Juneteenth celebration marks the official end of slavery on June 19, 1865, when Union soldiers arrived in Texas with news of the end of slavery. Though the Emancipation Proclamation was signed Jan. 1, 1863, there was not enough of a Union presence in Texas to enforce the terms.

Farmer said several members of Better Together Winchester are also members of the Winchester-Clark County Black History and Heritage Committee, so it made sense to join forces on June 19.

Plans call for the Rev. Marvin King Jr. of First Baptist Church on Highland Street to be the featured speaker.

All participants are encouraged to wear masks and obey social distancing, she said.

The events are a response to recent events as well as an effort to find a way forward.

“It’s about all of the injustice,” Farmer said. “We truly are better together.”

James Nisbet of Winchester, the first person in Clark County to have COVID-19, did something last week to help someone... read more