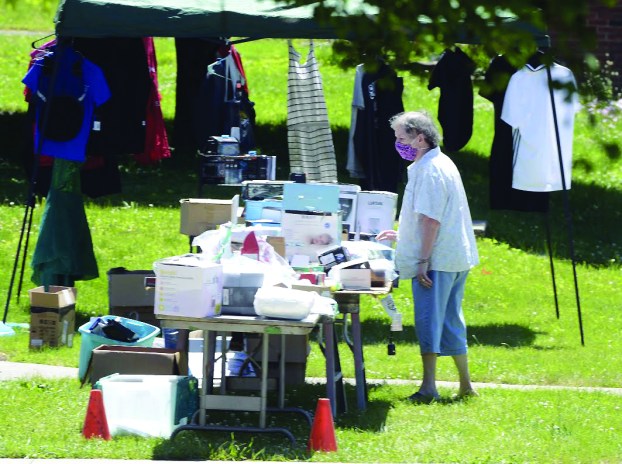 A customer wearing her mask looks at items for sale at a yard sale on Boone Avenue on a recent Sunday afternoon. The state has not given permission for yard sales to resume. (Photo by Randy Patrick)

Yard sales not yet allowed

There were only a few yard sales this past weekend, but there weren’t supposed to be any. They are not allowed until the governor decides otherwise.

In his daily press briefing June 3, Gov. Andy Beshear addressed the issue of yard sales springing up around Kentucky and said they cannot be allowed.

“Not yet,” the governor said, answering a written question about the sales. We’re looking at when that could be. Obviously, the cleaning and the PPE and other requirements are a lot harder on yard sales, and it’s also people’s stuff that has been touched that other people are coming up and touching, so we’ve got to make sure.”

That goes against state and local public health efforts to reduce the spread of the highly contagious and sometimes deadly coronavirus by limiting social interaction.

Kissick said many had assumed rummage sales of all kinds were considered retail, so about the same time the state allowed nonessential retail businesses to reopen at one-third capacity on May 20, many residents believed restrictions were relaxed on selling items from their homes as well.

Two weeks ago, Kissick said, her environmental staff went out to talk with some people who were holding yard sales to inform them that they were not yet allowed.

“We received quite a few phone calls last week about yard sales,” she said, and they’ve had to explain why they are not allowed.

“We’re trying to limit contact between households,” she said, and bringing things out of one’s home and selling them risks spreading the virus, she said.

She said the Health Department would let the public know when the situation changes, but “right now, we’re not allowing them yet.”

Winchester City Clerk Dianna Layne said in a June 4 email that City Hall “has been getting a lot of questions about whether people can have yard sales or garage sales,” but the general counsel of the Cabinet for Health and Family Services has advised that the governor “has said a definitive ‘no’ to yard sales at this time.”

Monday, Mayor Ed Burtner said the city doesn’t enforce the public health regulations because those are the purview of Department for Public Health and county health departments.

The city also doesn’t have a permit or fee for yard sales, so it doesn’t do any city enforcement other than cautioning people about having them again and again at the same location, because that amounts to operating a commercial business in a residential zone, and it causes traffic and parking problems for others.

Burtner said he has driven around town and seen yard sales, but at most of them, it seems there are fewer than 10 people at a time, and those people appear to be social distancing.

AT THE LIBRARY: Books for essential conversations about racial justice

The deaths of Breonna Taylor in Louisville and George Floyd in Minneapolis have left most people outraged and disturbed. Most... read more