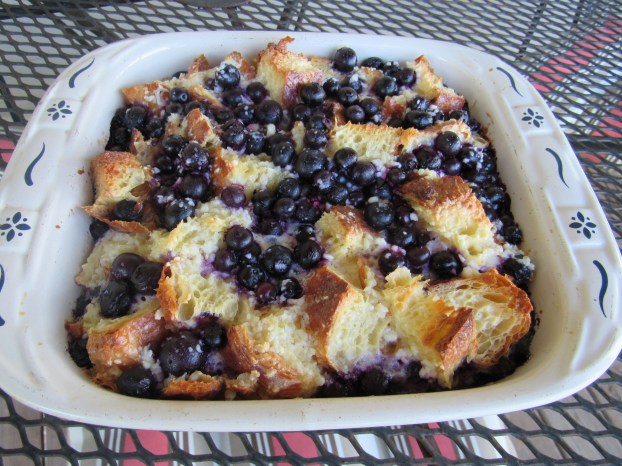 CONDLEY: Second croissant recipe takes a turn for the better

While at the grocery recently, I spotted croissants for a good price and picked up a couple packages.

After searching through my small pile of breakfast recipes to try, I pulled out two that use croissants.

One recipe was for croissant French toast, which I told you about last week.

The other was for today’s recipe: blueberry croissant puff.

Last week’s recipe was a flop in my book, just because it wasn’t as special as I thought it would be (it just tasted like regular French toast).

The recipe for Blueberry Croissant Puff came from the-girl-who-ate-everything.com in May 2015, and I could not wait to try it.

Beat cream cheese, sugar, eggs and vanilla in a medium bowl with an electric mixer until well blended. Gradually add milk, beating well after each addition.

Bake at 350 degrees for 35 to 40 minutes or until set in center and golden brown. Cover with foil for the last 10 minutes if the tops are getting too browned.

Variation: Instead of baking in a square pan bake individually. Place croissant pieces evenly in 10 (1/2 cup) ramekins; sprinkle with blueberries and pour cream cheese mixture evenly over croissant pieces. Let stand 20 minutes. Bake at 350 degrees for 20 to 25 minutes or until set in center and golden brown.

Recipe can easily be doubled in a nine- by 13-inch pan.

I turned on the oven, then greased a nine-inch square baking dish.

When cubing the croissants, you can cut them or you can tear them into medium-size chunks.

Once the three large croissants were in the dish, I sprinkled on a cup of frozen blueberries we’d grown last year.

I combined the remaining ingredients just like the recipe called for, then gently poured the wet mixture over the bread and let it sit for 20 minutes so the croissant pieces could absorb everything.

Now it was time to put it in the oven to bake.

After 35 minutes, the puff wasn’t as brown as I wanted it to be so I let it continue baking an additional five minutes. Perfect.

I removed the dish from the oven, and it smelled pretty good.

I let it cool, then sunk a spoon in for a small serving. I took a bite and thought it was a little too mushy for me. I offered Brad a bite, and he said it was OK, but agreed it wasn’t great.

I hung my head and shoulders and couldn’t believe I’ve had two “failed it” recipes in a row. Darn it.

Once the pastry was completely cooled, I covered it and put it in the refrigerator. I thought maybe it would be better cold.

The next morning, I scooped a spoonful out, and instead of eating it right from the refrigerator, I heated it in the microwave for five seconds. That way it wasn’t too cold, but it wasn’t warm either.

I couldn’t believe it. It was actually pretty good.

A little powdered sugar sprinkled on top not only made it pretty, but helped the flavor.

Brad and I (mostly me) ended up eating it all ourselves, except for one good-sized serving he took to our friend Sandra.

She said she really liked it and not to bring her anymore because she’d eat it.

This once failed it recipe turned into a nailed it.

I’m sure it will be good with other fruits if you don’t care for blueberries. I expect blackberries or strawberries would be just as good, and if I spot croissants for a good price, I will likely give this recipe another try, since I’ll be keeping it for my self-made cookbook.

CONDLEY: Chalk this French toast recipe up as a ‘failed it’

While shopping, I browsed the clearance section from the bakery and found a couple of packages of croissants for a... read more