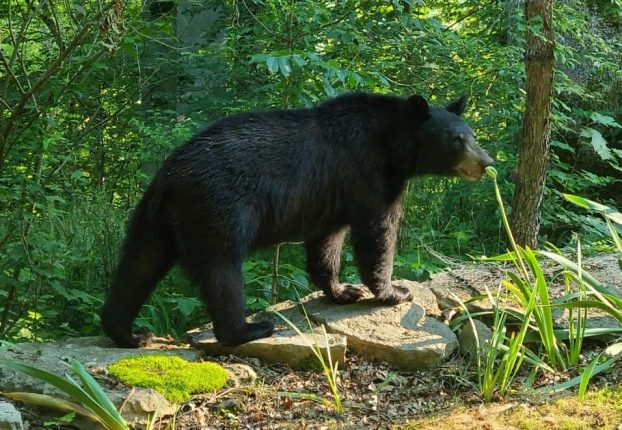 There has been another black bear sighting in southwestern Clark County.

Jim Boyd and his farm manager, Mark Maikkula, captured images of the bear on game cameras on the 190-acre farm on Jones Nursery Road in Clark and Fayette counties.

Boyd thinks it may be the same young male that was seen and photographed near Pine Grove just across the Clark County line in early June.

He said there hasn’t been a bear in that area in 100 years, so it seems unlikely that in just over two weeks there would be two seen in the same area.

But Jim Hast, a biologist for the state Department for Fish and Wildlife Resources and an expert on bears, said in a recent interview with the Sun that young bears are on the move during mating season because the older males will kill them if they stay around the females, and the mother bears will run them off to keep them away from their sisters. The bears are looking for a meal or a mate, or both, he said.

The last bear, seen June 3 by Ben Webb and some of his farm workers, was also seen by others on Todds Road, Athens-Boonesboro and Riviera Road near Winchester Road in Fayette County.

Half an hour later, some workers on a neighbor’s farm were cutting hay and one man returned to his truck when he saw it.

“It was sitting right next to the truck,” Maikkula said.

Then around 3:40 p.m., a stone mason spotted the bear crossing a fence into a pasture where there were some expensive horses and alerted others.

Maikkula said George Mateyoke took a photo of the bear with his cell phone from the door of his barn at his farm on Gentry Road.

“I didn’t see him personally, but George was within 50 feet,” Maikkula said.

By early Saturday morning, he said, the bear had crossed over Boone’s Creek and was seen around the Kentucky River Palisades.

Maikkula and Boyd said Boyd’s farm has whitetail deer, bobcats, quail, wild turkeys, beavers, minks, otters and all kinds of other wildlife. But they’ve never had a bear before.

“I always wanted a bear out there,” Boyd said.

Although bears are becoming more common in Eastern Kentucky than they were many years ago, Hast said, it’s unusual to see them in the Bluegrass around Lexington. There was one hit and killed by a vehicle on I-64 in Clark County in 2013 and another spotted on Taylor Made Farm in Jessamine County in 2016. Not long before the one was seen on Todds Road near Pine Grove, there was another spotted in Jessamine.