BALDWIN: Film is the cure for the summertime blues

Summer is here. Our days are long, the temperatures are hot and the classic films being screened by Fred Mills and his dedicated crew at the Kentucky Theatre since the June 1 reopening, is the coolest venue locally.

The past six months full of fear, confusion and turmoil, the Kentucky Theatre is entertaining the masses with weekly sizzling titles, and today we will showcase their releases which start screening today. 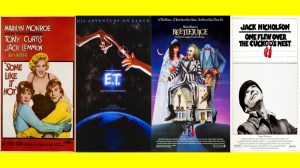 “Some Like it Hot” (1959) is a romantic comedy directed by Billy “Sunset Boulevard” Wilder and starring Marilyn “The Misfits” Monroe, Tony “Spartacus” Curtis, and Jack “The Apartment” Lemmon.

After witnessing a mafia murder, saxophone player Joe (Curtis) and buddy, Jerry (Lemmon), improvise a quick plan to escape Chicago and stay low to in hopes to survive and outsmart the gangsters.

The duo finds that the best way to pull this off is by disguising themselves as women. They join an all-female jazz band train bound for idyllic Florida.

Comedy ensues, as you can imagine, in this funny and all-time classic comedy showcasing the talents of all involved.

“E.T. the Extra-Terrestrial” (1982) is the heart-warming sci-fi drama of Elliott, portrayed by Henry “The Haunting of Hill House” Thomas, a struggling boy who befriends an gentle extra-terrestrial, E.T., who becomes stranded on Earth when his ship leaves him behind in sunny California.

“E.T.” was directed by iconic filmmaker Steven “Jaws” Spielberg, and is a tale about friendship, loyalty, family and the effects of divorce on children.

Fantastic special effects for the time, the breakout stardom of a young Drew “Santa Clarita Diet” Barrymore and the creation of the candy Reese’s Pieces are just a few highlights of this memorable 1980s movie magic.

“Beetlejuice” (1988) is the Tim “Ed Wood” Burton comedy about small town couple Adam, portrayed by Alec “30 Rock” Baldwin, and Barbara, portrayed by Geena “The Fly” Davis, who unexpectedly die in a car accident and have to learn the rules of being a ghost and the protocols of the undead.

While the dead duo are learning about their new situation and have pretentious new inhabitants moving into their now vacant home from the city, Charles, portrayed by Jeffrey “Ferris Bueller’s Day Off” Jones and Catherine “Schitt’s Creek” O’Hara and their death-obsessed teenage daughter Lydia, portrayed by Winona “Edward Scissorhands” Ryder.

Trying to learn how to haunt their own home to scare off their new tenants, Adam and Barb meet a crude and deviant poltergeist, Beetlejuice, portrayed by Michael “Batman” Keaton, and their world gets even weirder and scary when he is released from his chains in the underworld to rid the new owners of the house. This is a must-see for classic Tim Burton fans

Lastly, “One Flew Over the Cuckoo’s Nest” (1975) is the blockbuster drama starring Jack “The Shining” Nicolson playing the part to perfection of McMurphy, a charismatic rebellious, wild and independent criminal who is placed into an Oregon mental institute as a way of trying to skip out on hard labor to fulfill the rest of his sentence.

While there, McMurphy becomes a problem for the heartless head nurse Ratched, portrayed by Louise “Flowers in the Attic” Fletcher, as he brings chaos to her world because of his mission of trying to liberate the other patients from Ratched’s physical and psychological controls within the hospital.

“Cuckoo” was a box office blockbuster that has gone on to become cited as one of the greatest American films.

It was adapted for the screen and based off author Ken Kesey’s 1962 novel of the same title, which was inspired from his time being used as a test subject in the CIA’s experimental LSD MK-Ultra program in 1959 while attending Stanford University. Trippy stuff.

Much to do, much to see, so head over to the Kentucky Theatre to keep cool and watch some cool flicks. All of the cool kids are doing it.

Stay hydrated and have a film-tastic day!