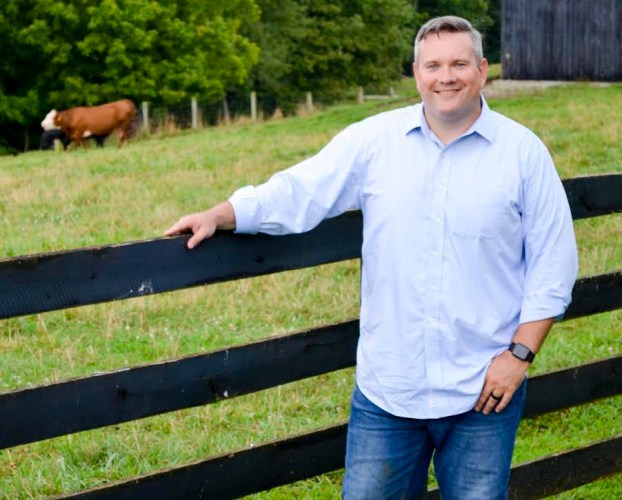 Josh Hicks, a Lexington attorney and former police officer and construction worker, is running for the 6th District U.S. House seat in the June 23 Democratic primary.

Democrats’ choice for House an ex-cop

At a time when police behavior and black lives are at the front of voters’ minds, the Democratic candidate for the 6th U.S. House District is a white former cop, Josh Hicks.

Hicks, who won the Democratic primary last Tuesday against Daniel Kemph, thinks his background as a former Maysville police officer makes him the right person to speak about the issues surrounding law enforcement.

“I feel a responsibility as a former police officer and as someone who trained police officers,” Hicks said before the June 23 primary.

Hicks said he can use his knowledge of policing to “speak out against things I see that are wrong and in favor of things that are right … and it’s something that makes me speak on these issues with a little bit of credibility.”

The candidate said that after watching the video of a Minneapolis officer holding his knee on the neck of a black man, George Floyd, until he died, while three other officers stood by and watched and did nothing, the only conclusion one can draw from that is “yes, there is a problem” in law enforcement.

Hicks, now a Lexington attorney who practices civil litigation, went to law school while working nights and weekends for the Maysville Police Department. He has also been a construction worker and a soldier. He grew up on a farm in Fleming County and played football at Georgetown College.

He is the first male Democratic nominee for the 6th District since Ben Chandler, who lost the seat it to the current Republican incumbent, Andy Barr, in 2012.

Emphasis on Hicks’ rural roots has been central to his message. In one video ad, he  is shown on the farm, wearing a barn coat and drinking coffee while the folk song “Barbry Allen” plays in the background. Hicks says in the video Congress needs more members who understand what it’s like to “grow up poor,” and “somebody on the doggone floor of the House shoutin’ ‘We’re gonna do stuff that helps these people. My people.’”

“I’m like a lot of folks in this district,” he told the Sun. He’s from a rural community, attended a small high school and owns his own small business — his law office. People like that aren’t being “properly represented in Washington right now, and I think that makes all the difference in the world.”

Hicks said people have seen “a failure of leadership” in the last eight years in Congress, including in the access to affordable health care.

“We’re right in the middle of public health crisis,” he said, referring to the coronavirus pandemic. Rather than get rid of the Affordable Care Act, as President Trump and most Republicans want to do, Hicks wants to strengthen it. “Within that framework, we need to reinforce the things that are working well. I think Medicaid expansion has benefited a lot of folks in this state, especially now.”

“I’m not for a single-payer system, but I do want to see a public option,” he said. “I think people need to be able to disconnect their health insurance from their employment,” especially now that hundreds of thousands of Kentuckians are out of work.

If health insurance isn’t affordable and accessible, he said, it doesn’t do anybody any good, and  anyone who is ill should be able to get treatment without worrying about losing their children’s college fund, their house or their savings.

Hicks said Barr has “sold us out to a bunch of corporations outside this state,” including opioid manufacturers and payday lenders, who “prey on folks in situations just like we’re in.”

Hicks said he thinks Gov. Andy Beshear has done a good job of leading during the virus crisis and has set a good example. Reopening the economy, he said, should be guided by medical data during a public health threat unlike any the world has faced in 100 years, he said.

The candidate said one approach to dealing with the economic and job losses people have faced would be to undertake some public works projects. Infrastructure is in need of improvement, and the projects would put people to work and strengthen local economies.

“I think that’s got to be our priority,” he said.

He isn’t only talking about road work either. Expanding rural broadband is a big priority of his, he said, because there are “inequities” across the district between children who can and can’t access distance learning and employees who can work remotely and those who can’t.

“That is tremendously unfair,” he said.

Barr said Congress should be smarter about how it spends money to help those hurt by the current recession. Under the payroll protection legislation, many publicly traded companies got big money while many small businesses were locked out.

“It should go to the most vulnerable first to the small businesses, to the people just barely hanging on,” he said.

As a former Marine, former police officer and avid outdoorsman, Hicks said, he is a strong supporter of the Second Amendment. But he is for “sensible things” such as universal background checks and laws to close loopholes that protect unmarried partners in domestic violence situations.

Hicks supports medicinal marijuana and said he could “see a path to recreational marijuana” as long as there are accurate roadside tests to curb impaired driving.

He said he would be willing to look at some restrictions on late-term abortions, but in general, he doesn’t think that “criminalizing a woman’s health care choices” is the way to reduce the abortion rate.

On the subject of institutional racism, Hicks said there are steps Congress can take to prevent redlining, improve loans and home ownership and provide oversight.

“We as leaders have to stand up and acknowledge that we have a problem,” he said. “We should be listening and develop partnerships with people of color.”

Hicks said that if he is elected, the House committees he would like to serve on are Veterans Affairs, Armed Services and Agriculture.