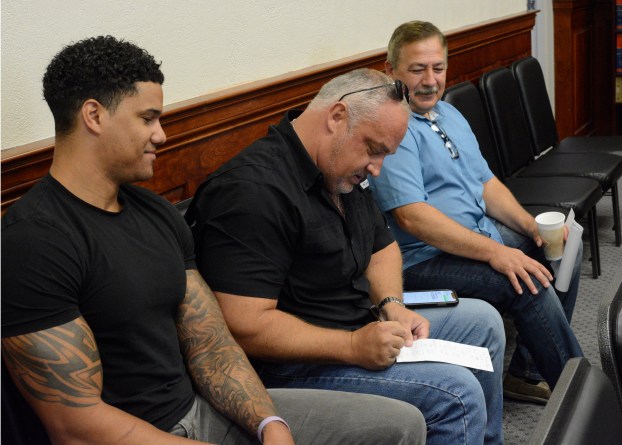 Ryan Dotson tallies figures on the night of the primary election in June. One of the issues he ran on was limiting the governor's emergency authority

Ryan Dotson beat Les Yates by only two votes in the Republican primary for state representative among Clark County voters.

And on the Democratic side, it was even closer. Kenny Blair bested Rory Houlihan by a single vote.

“It just goes to show that every vote counts,” Clark County Clerk Michelle Turner said as she was reading the results to a small audience in the Fiscal Court room Tuesday morning.

Madison County Clerk Kenny Barger said Banks’ votes won’t be counted by the state because she is no longer a candidate.

Three precincts of the 73rd District are in Madison County. The rest of the district is all of Clark County.

All of the candidates except Banks were from Clark County.

“Les is a strong incumbent, and he has a good voting record n Frankfort, so I knew it was going to be an uphill battle from the get-go,” Dotson said in an interview moments after the votes were announced.

Dotson said he didn’t differ with Yates over his votes, but he said he differed from him philosophically.

“I feel I’m more in tune with the local party” and the community, he said. “I’m a fighter” for “conservative Christian values.”

Dotson ran as a conservative Democrat for the Kentucky Senate in 2010 but lost to then Minority Floor Leader R.J. Palmer. Then he switched parties and ran as a Republican against incumbent Democratic County Judge-Executive Henry Branham six years ago and lost.

Yates lost to former Republican incumbent Donna Mayfield of Winchester in 2016 then ran unopposed for the GOP nomination two years ago when Mayfield decided not to run for another term.

He said this race was closer than he thought it would be.

“I thought it would be tough,” he said, but “under normal circumstances, I thought I would do better. This was anyone’s guess.”

Because of the public health threat presented by the coronavirus pandemic, state officials changed the rules for this year’s primary election to allow anyone to qualify to vote by absentee ballot, either at the County Clerk’s Office or by mail. Mailed ballots were counted by the state as part of the election totals rather than as absentees.