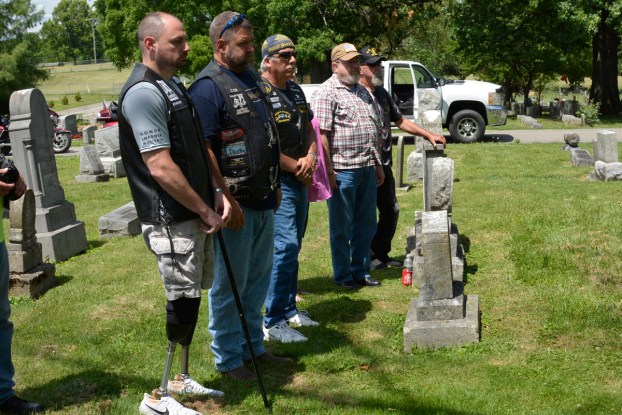 The 20-year-old, who is buried in the Winchester Cemetery, was killed in action on the island of Saipan in World War II when he threw himself on a Japanese grenade to prevent it from killing and wounding his fellow warriors.

A year after his death, he was awarded the Medal of Honor, the nation’s highest honor for valor.

Seventy-six years to the day, members of two motorcycle groups for military veterans, Patriot Guard and Rolling Thunder, honored Epperson’s sacrifice with a graveside service and were joined by some Clark County residents.

“It’s good to honor those who made the ultimate sacrifice,” especially those who did so as unselfishly as Epperson did, said Marine Cpl. Matthew Bradford, a double amputee veteran of the war in Iraq.

“The whole model of the Marine Corps is semper fidelis,” Bradford said.

After the ceremony, during which there was an honor guard, prayer, the playing of taps, laying of flowers and silent salutes by veterans, the two groups, with the cemetery’s permission, raised a new American flag and a new prisoner of war flag at the entrance, a short distance from a memorial honoring Epperson.

Epperson enlisted in the military at his hometown in Ohio at the age of 17. His remains were interred in Winchester to be close to family members who later moved here.

Major solar energy projects may be coming to Clark

The Clark County Fiscal Court urged the county planning and zoning commission to consider amending the zoning ordinance to include... read more