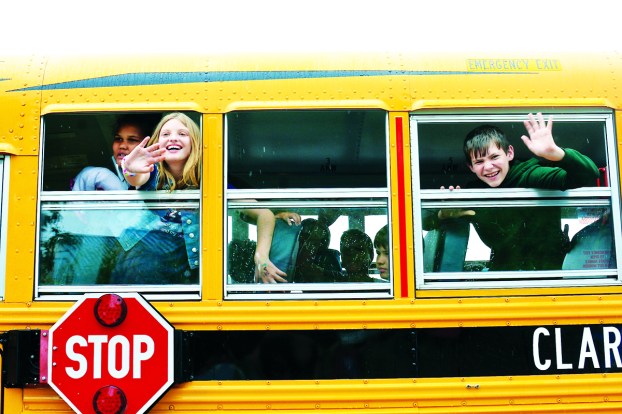 Baker Intermediate students wave to their teachers as they board their final school bus of the 2018-19 school year. The 2020-2021 school year will begin Sept. 8 for students. (Sun file photo)

Students to return after Labor Day

Students in Clark County Public Schools will return to classes after Labor Day and go until the Friday before Memorial Day.

The Board of Education approved an amended calendar for the new school year during a special meeting Monday night.

Opening day for schools will be Aug. 31, and the rest of that week will be teacher work days. Students would come back the next Monday, Sept. 8.

The students would not get a fall break, but would be off for Labor Day, Election Day, Nov. 25-27 for Thanksgiving, Dec. 21-Jan. 1 for Christmas break, Jan. 18 for Martin Luther King Day, Feb. 15 for Presidents Day (a possible make-up date) and March 20-April 2 for spring break.

May 28 would be the last day for students to be in classes.

“That puts us graduating on a Friday, which is what we like, and that gets us out before Memorial Day,” said Ashley Ritchie, the board chair, who recommended amending the option selected to add seven days, bringing the total to 168 instructional days. State law requires 162.

Board Member Scott Hisle was the only dissenting vote. He wanted students to start back earlier and have 173 days.

“I think there are so many unknowns that are going to happen throughout the year, the later we start school, that just reduces the options that we have,” he said.

But Board Member Gordon Parido, who favored the later start, also cited unknowns in his reasoning, and thought Clark County could learn from other school districts that start earlier.

“I like the idea of watching somebody else open up and see what their issues are,” he said.

Most of the meeting was devoted to discussing four different plans for returning to school during the coronavirus pandemic, but the board did not yet vote on an option.

Superintendent Paul Christy recommended Plan A, which a couple of board members also said they liked.

The plan would have all students in kindergarten through 12th grade return to school, and parents with concerns about the virus would have a choice of having their children learn online or in the classroom.

Under Plan B, students in kindergarten through sixth grade would attend classes five days a week, and students in seventh through 12th grades would alternate between in-person and virtual learning, using a hybrid schedule.

Under Plan C, all students in all grades would have an alternating schedule between in-person and virtual classes.

And under Plan D, all students would be at home, using non-traditional instruction days. Under that scenario, bus transportation would be eliminated, but food service would continue as it did in the last three months of 2019-2020.

The following students were named to either the principal’s list or honor roll at Calvary Christian Church for the final... read more