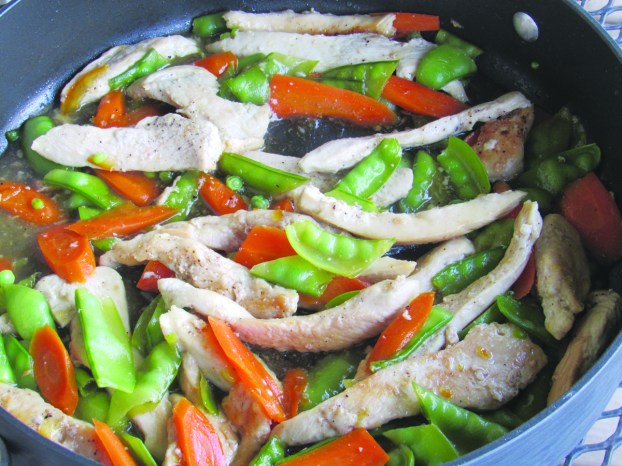 Heat 12-inch non-stick skillet over medium heat. Add chicken; sprinkle with salt and pepper. Cook 6 to 8 minutes, turning once, until brown. Remove chicken from skillet; place on plate and cover loosely with foil to keep warm.

To same skillet, add sugar snap peas, carrots and water. Increase heat to medium-high; cover and cook 4 to 6 minutes or until crisp-tender. Meanwhile, in small bowl, mix marmalade and cornstarch until well blended.

Return chicken and add marmalade mixture to skillet; cook 2 to 3 minutes longer, stirring occasionally, until chicken is no longer pink in center and sauce has thickened.

If mixture gets too thick, add up to 1/4 cup additional water

We picked up a pound of sugar snap peas at the Winchester Farmers’ Market and I enjoyed eating them raw as a crunchy snack. With only 10 calories in about eight or nine of them, they are a healthy alternative to chips or crackers.

A couple of days later, I realized how many are in a pound. So they would not go to waste, I started a search for a recipe that included them.

Today’s recipe for Orange-Glazed Chicken Skillet from www.pillsbury.com sounded quick and easy to prepare. Though the recipe calls for frozen sugar snap peas, fresh ones work just fine.  The recipe also calls for baby carrots. I rarely buy the baby carrots, opting to peel and slice my own.

The night before I was going to prepare this dish, I thawed and cleaned a little over a pound of boneless chicken breasts and cut them in to tenders. I placed them in salt water and stored them in the refrigerator for use the next day.

I still had time on my hands so I prepped the sugar snap peas by rinsing them and breaking the ends off, making sure to remove any strings. I peeled and sliced up a couple of carrots which equaled one cup.

For supper the next evening, I heated a non-stick skillet and cooked the chicken in two batches. I didn’t want to crowd the pan with chicken because I didn’t want the meat to steam instead of brown. I salted and peppered the chicken after placing each piece in the pan.

When each piece of chicken was done, I placed the tenders in a bowl and covered it with a plate to keep them warm. Once all the chicken was cooked, I threw the sugar snap peas and carrots into the skillet, added the water and turned up the heat just a little bit.

While the veggies cooked, I mixed the orange marmalade and corn starch so it was ready to pour in when the vegetables were crisp tender and had a bright color. Next, I added the cooked chicken back to the pan and gave the dish a good stir to coat everything. In no time, the dish was ready to serve.

Brad and I sat down for our evening meal and he blessed the food. We were anxious to try this dish. I’d prepared some white rice and wild rice as well.

As we ate, we both commented on how good this dish was. I asked Brad, “Wo, you wouldn’t mind having this again?” He said that would be great. He also suggested adding some of his shiitake mushrooms next time.

This dish was so easy to prepare and we both liked it so much that it is definitely a keeper and a Nailed It in my book.

If sugar snap peas aren’t available at the farmers’ market, I guess I just have to put them on my grocery list.

Today’s recipe comes from Pampered Chef’s website. I’d been searching the website for recipes using one of the spice blends... read more