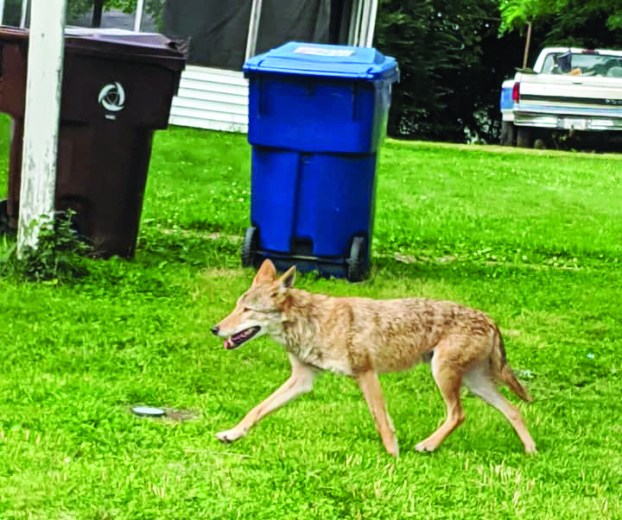 Diana Royse took this photo of a coyote running through a yard near Fitch and Snowden recently. The wild canines have been seen near downtown, along the bypass and in Holiday Hills, where she lives. (Photo by Randy Patrick)

Diana Royse couldn’t believe what she was seeing.

She had left her home on Estes Drive to drop off her utility bill and was driving on Fitch Avenue when she saw coming down the street what looked like — yes, it was — a coyote.

She snapped a couple of photos with her phone, including a clear closeup of the animal running past some garbage bins.

She was safe inside her car. Still, it frightened her, she said.

“It gave me me a shock. I’m not used to seeing coyotes,” she said. “That’s the first one I’ve seen” in town.

Royse had heard of other coyote sightings nearby, including one near her daughter’s house.

“They’ve spotted it throughout the neighborhood,” she said.

Steve Greiwe, who lives on Fulton Road in town, said he saw one run across the street and down by his next door neighbors’ house about two weeks ago.

Craig Caudill of Winchester, an outdoors writer and director of the Nature Reliance School, said that in talking with police officers and others, he knows there have been coyotes seen around that part of town. He said it looks like they’re in the woods behind 84 Lumber and near Calvary Christian Church, across the bypass from the Kroger shopping center.

“It isn’t strange at all,” Caudill said, when asked whether it was unusual to see coyotes in town. “There’s a huge feral cat population behind Goodwill,” and that’s the big draw.

“It’s basically a buffet for coyotes,” he said.

Also easy prey, he said, are the squirrels in town that are unafraid of people and not used to being hunted.

It would be unusual for a coyote to attack a human, even a child, but someone out walking a little dog might be at risk, he said.

Caudill has seen coyotes on the edge of town, but not in the city.

Coyotes are closely related to wolves but smaller. Forty to 45 pounds would be large for a male. They’re mostly carnivorous, and in the wild, they eat rabbits, squirrels and smaller rodents, birds and other small animals.

John Hast, a biologist for the Kentucky Department of Fish and Wildlife Resources, said it isn’t unusual to see coyotes in the city. They’ve been seen all over Chicago, from Wrigley Field to the boardwalk on Lake Michigan, and in Louisville’s Cherokee Park.

“They’re highly successful  generalists. They can eat almost anything. They can adapt to live almost anywhere,” he said.

Like raccoons, foxes and bears, coyotes will come right up onto your porch and get into your dog’s food dish or bird feeders, he said, so one way to keep them away is to keep food away from them.

Back to school will be different this year

Students in Clark County Public Schools will return to classes after Labor Day, but going back to school will be... read more