COVID-19 has affected every part of our lives, and we continue to learn, adapt and overcome daily.

With the sacrifices being made by all in one regard or another, annual events have been postponed this year for the sake of all and, unfortunately, Lexington’s own Harry Dean Stanton Fest has been postponed for the 2020 season.

As much as this dampers Stanton and fans from this great summertime event showcasing the talents and art of one of the Bluegrass’s favorite sons, The Kentucky Theater has come through once again by stepping up to start screening Stanton’s popular “Pretty in Pink” (1986) today for a one week run. 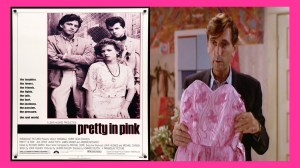 “Pretty in Pink” is the classic romantic teen comedy about Chicago outcast Andie, portrayed by Molly “Sixteen Candles” Ringwald, as she tries to survive the social structure dramas of high school and falls for Blaine, portrayed by Andrew “St. Elmo’s Fire” McCarthy, a rich and popular boy she viewed as out of her league.

“Pink” is not as cut and dry as girl meets boy, they fall in love and they live happily ever after.

Andie struggles with typical teenage self-identity issues, unwanted affection turned harassment by the posh snob Steff, portrayed by James “The Blacklist” Spader, a crush and sincere loyalty from her true best friend, Duckie, portrayed by Jon “Two and a Half Men” Cryer.

Andie is far from being a skilled communicator as she does come across brash at times leading the viewer to understand her outcast status and ponder why such a girl could be endeared by three different guys?

Andie is like most teenagers who are working out their kinks while in search for their self-worth and voice as the real-world slaps them into adulthood.

Andie is portrayed as being “poor” though she lives in a normal middle-class house, works at a record store, designs her own clothes, appears healthy and has everything that is needed to be an average person.

Rich with cash, no. Far from poor.

These skewed details emphasize how the rich and Hollywood see the world and those who are not at their economic social level. Hollyweird has always been disconnected from the real world.

Though “Pink” is a teen comedy written by 80s filmmaker legend John “Breakfast Club” Hughes, there still is plenty of heart and drama towards moody Andie and Jack, her unemployed, sad but lovable father, portrayed by Harry Dean “Christine” Stanton’s, domestic situation because of the absence of a mother.

The lack of female parental guidance by a present mother for Andie is met by her healthy relationship with her older, quirky record store boss Iona, played by Annie “Ghostbusters” Potts.

“Pretty in Pink” was a box office success upon its release and another feather in filmmaker John Hughes’s hat as he was king in the teenage comedy drama genre.

Hughes had a gift for portraying the motivations and desires of youth in a relatable and serious manner while they have their coming of age moments.

“Pink” also had a solid soundtrack with 80s staples from OMD, INXS, New Order, Echo & the Bunnymen, as well as The Psychedelic Furs, who sang the title track and was the inspiration for the title of the film though the girl is named Caroline in the song, not Andie.

Neat side note: British Fur’s Tim Butler now resides in Liberty, Kentucky, after moving here from England. Even the Brits can’t resist the power of the Bluegrass or the bourbon.

Caroline laughs and wants you have a pink film-tastic day.

In light of the changing landscape that has taken place in our world and community over the past four months,... read more