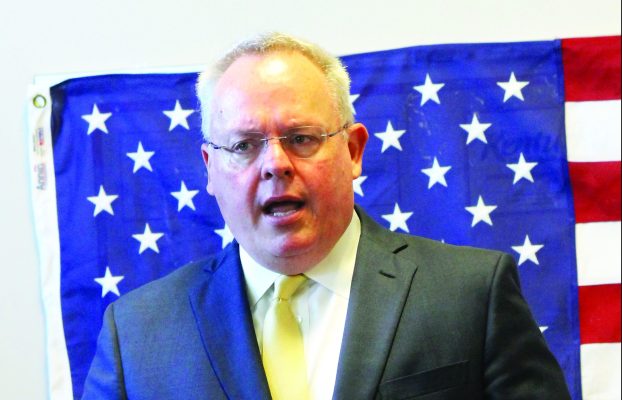 Clark County will get more resources to fight the opioid epidemic by being part of a multi-county federal anti-drug program.

During a press conference in Winchester Wednesday morning, Senate Majority Leader Mitch McConnell made the announcement that Clark was one of three Kentucky counties chosen for inclusion in the Appalachia High Intensity Drug Trafficking Area, which operates in Virginia, West Virginia, Kentucky and Tennessee.

The senator was joined by Jim Carroll, director of the White House Office of National Drug Control Policy, which administers the HIDTA program.

The effort provides federal support to law enforcement in designated counties for equipment, technology, personnel and coordination with other agencies.

“He only designated 15 new counties in America this year, and … three of them are in our state,” McConnell said, referring to the White House drug czar. “That’s a clear recognition of how challenging this whole matter is.”

The drug scourge “didn’t take a break during the pandemic,” McConnell said. In fact, the coronavirus crisis made it worse.

In all, Kentucky has 36 HIDTA counties. The other two new Kentucky counties that were recently added along with Clark were Logan and Simpson. Davidson County (Nashville), Tennessee, also part of the Appalachia HIDTA, was also included.

The Clark County Sheriff’s Office will be working with law enforcement agencies in two other counties that were already part of the program, Montgomery and Powell.

“What we’re doing is making sure that the sheriff has what he needs — the resources, technology, the information sharing, so that he and his 14 deputies” can more effectively fight the drug problem, Carroll said, referencing Clark County Sheriff Berl Perdue.

The money will be used to identify, arrest and prosecute those involved in trafficking heroin, fentanyl and other illegal substances.

The money isn’t only for interdiction and enforcement, though. Part of it is used by the task force for education and rehabilitation as well as investigation.

Carroll said health departments and rural hospitals will get access to “real time data” they need to see what drugs are out there and where there are spikes.

Although the counties don’t actually receive the money as grants to do with what they want, there is local input on what the needs are.

Deputy Director Micky Hatmaker of Appalachia HIDTA’s London, Kentucky, office, said he expects the new allocation for the three counties as well as Davidson County, Tennessee, to be “somewhere in the neighborhood of $500,000,” because that is the amount requested, but the group won’t know the amount for at least a couple of weeks.

Perdue said his office won’t be adding more personnel, but the assistance from HIDTA will help pay for some overtime for his officers and benefit his office in other ways.

“One of the main things it gives us is better investigative techniques and technology, things we can’t afford in our budget, and now they’ll be available to us,” he said.

“We work together. The drug problem is something that doesn’t respect boundaries,” he said.

Senate Majority Leader Mitch McConnell said Wednesday there will likely be another stimulus measure to help businesses and others hurt... read more