Brad put in a raised garden bed close to our house and decided he would experiment with growing lettuce, spinach, onions, kale and cabbage.

Some of the seeds came from the public library. Their seed library is a really nice product that they offer our community.

The lettuces did well until it turned so hot that the greens are now bitter. I wanted to know why the lettuces were bitter, so I looked that question up on the internet and learned they need cooler temperatures and more moisture than we provided. I guess we should have done a little more research before planting.

We still have some seed, and we plan on planting again in the fall to see what happens.

Kale on the other hand doesn’t seem to take on the bitter taste the other greens do.

I don’t really care for kale, but thought maybe I’d like kale chips.  A few years ago, they seemed to be all the rage. I figured olive oil and salt would surely make it taste better.

I did a quick search on the internet when I found today’s recipe on foodnetwork.com, courtesy of Melissa d’Arabian.

The recipe is simple and I found it was similar to others I viewed on other websites. 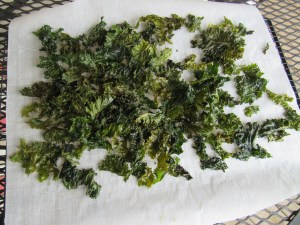 Remove the ribs from the kale and cut into 1 -1/2-inch pieces.  Lay on a baking sheet and toss with the olive oil and salt.  Bake until crisp, turning the leaves halfway through, about 20 minutes. Serve as finger food.

I went out early on a Saturday morning and cut some kale.

Morning is the best time to cut greens because of the cooler temperature. From what we’ve found, you don’t want to cut greens in the heat of the day.

After cutting a bowl full of kale, I brought it in the house and rinsed it. To dry it, I placed it in a salad spinner.  After a few spins, I laid the leaves on paper towels to finish drying.

During my research on kale chips, I learned the leaves need to be thoroughly dry so they’ll crisp up well.

As I patted the remaining moisture off the leaves, I removed the stems from the kale.

Removing the stems took more time than I thought it would. Once all the kale was destemmed, I was ready to preheat both our ovens.

Most of the kale leaves were small so I didn’t bother cutting them into pieces.

I placed the kale in a bowl and poured in the olive oil. I gave the greens a nice gentle toss and then spread them out on parchment-lined baking sheets.

Before placing the kale in the oven, I sprinkled sea salt over them. I didn’t heavily salt the kale, thinking I could always add more salt if they needed it.

The kale went into the ovens, and after 15 minutes, I turned the leaves over.

The kale stayed in the oven another 10 minutes.

I opened the oven door and was amazed at how much the kale had shrunk.

I removed one kale chip from the pan and tasted it.  It was crispy, so I removed both pans from the ovens.

So the chips would not continue to cook on the hot pans, I slid the parchment paper off the pans onto cooling racks.

I wondered if more salt would help.

When Brad came into the house, I asked him if he wanted to try the kale chips. He put a few in his mouth and said he thought they were good. They must have been because he kept eating them, and he thought they had enough salt on them.

I was surprised at how light and airy the chips were.  I thought you might be able to use them with dips, but these just crumbled in your mouth. Maybe the kale you buy at the store, with larger leaves, would be more suited for dipping.

This recipe is a definite nailed it for Brad. I’ll just pass.

I’ve cut more kale, and since these chips are so simple to make, I will probably be making more for Brad in a day or two.