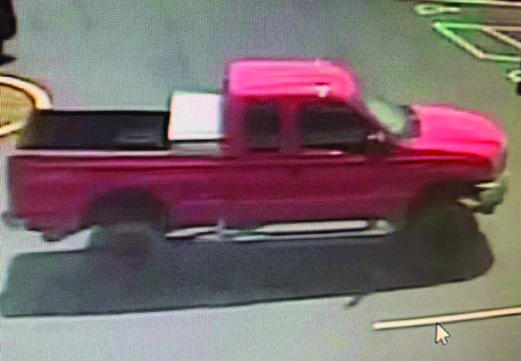 Winchester Police are searching for the driver of this truck who is the suspect in an armed robbery Monday afternoon. Police said they driver took a small amount of cash from a woman who was stopped in her car at an intersection. Anyone with information should call the Winchester Police Department at 745-7400. (Photo courtesy Winchester Police)

Police are investigating an armed robbery in which a woman was robbed as she sat in her car at an intersection Monday afternoon.

Winchester Police Capt. James Hall said the incident happened around 12:50 p.m. at the intersection of Martin Luther King Jr. and Pioneer drives. The victim, he said, was stopped at the intersection when a white male approached her vehicle with a gun.

“He demanded money from her, she complied and he fled the scene,” Hall said.

The woman said she saw the man get into a red pickup truck and drive away. Hall said the truck, which was recorded on surveillance video, appears to be a red Ford extended cab pickup truck with a suspension lift and a tool box in the back.

Hall said it appears to be a random robbery.

“This was a crime of opportunity for him,” Hall said. “He took what cash she had.”

Hall said the robbery may be connected to another robbery which occurred a couple days ago in another county.

Anyone with information on the incident or the truck is asked to call the Winchester Police Department at 745-7400.

On Tuesday, the Clark County Public Health Director Becky Kissick said she was pleased to report there were no new... read more