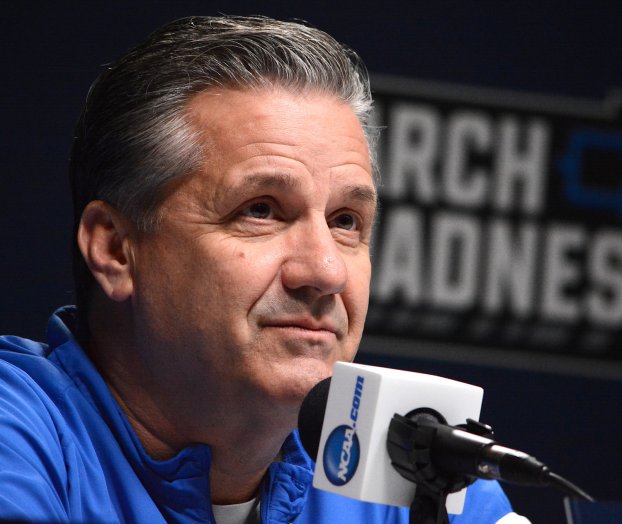 In less than a week, Kentucky coach John Calipari will personally get reacquainted with his team.

The Wildcats returned to campus on June 29 to prepare for the upcoming season but those voluntary workouts haven’t been under Calipari’s watch. Because of the ongoing COVID-19 pandemic, Calipari has been separated from his team, but remains in contact with his players through a Zoom videoconference at least twice a week.

“They keep saying, ‘Coach, we want to see you. I came here to work with you. Where are you?’” Calipari said during a Zoom videoconference Monday. “But I can’t be in the gym with them until the (July) 20.th

“I’m not even allowed to be in my car waving to them, which is why I just left campus. I haven’t been in my office.”

The Southeastern Conference is navigating through the coronavirus crisis with an abundance of caution and canceled volleyball, soccer and cross country competition through Aug. 31. The delay includes exhibition and non-conference contests.

Under directions from Calipari, strength coach Rob Harris conducts the voluntary workouts and Calipari wants his team to become engaged with each other while in the proverbial bubble on campus.

When he does meet with his team Monday, Calipari’s main focus will be on “individual work, with conditioning combined.”

Since retuning to Lexington, all 15 of his players have tested negative for the coronavirus, mostly because the Wildcats have been in a bubble of their own.

“We’re safe so long as no one is breaking the bubble,” he said. “We’re just trying to guard against all that stuff.”

The fact that the team’s lodge is adjacent to Memorial Coliseum has proven to be beneficial for the players and workout personnel.

“We’re unique,” Calipari said. “We’re in the lodge where it’s a single room with a single bathroom. They walk across the parking lot and they’re in a sterile gym that no one else is using. No one else is even in the building.

“Weight training and conditioning is outside. The meals are box meals. The chef makes it and leaves it outside. If we’re ordering meals away from campus, they’re delivered outside. No one breaks inside the building. You’ve got a sterile bubble that’s as good as it gets anywhere.”

SEC to make decision on football, other fall sports by late July

By KEITH TAYLOR, Kentucky Today LEXINGTON — The athletic directors in the Southeastern Conference gathered in a huddle — social... read more