We were going to have chicken for supper one evening and I wanted something different that would not take a lot of time to prepare.

Before leaving for work I quickly looked through the chicken recipes I’ve saved over the years and found today’s recipe for French’s Crunchy Onion Chicken.

I’m sure you’ve seen this recipe.  It’s part of an advertisement for French’s French-Fried Onions that appears in magazines all the time.

With only three ingredients I thought it couldn’t get much simpler than that.  Also, I had all of the ingredients I’d need, which meant I could go straight home after work, no stopping at the grocery. 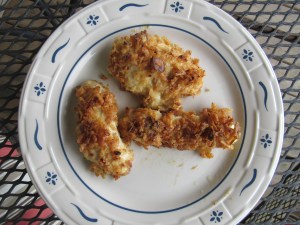 Dip chicken into egg; then coat in onion crumbs.

Bake 20 minutes at 400 degrees, until cooked through.

Before I left for work, I asked Brad to get a package of chicken out to thaw.

When I arrived home after work, I cleaned the chicken and sliced the boneless breasts into strips.

I poured the French-fried onions into a zippered bag and used my hands to crush them.

I beat one egg in a bowl, and then set the oven temperature to 400 degrees.

I lined a rimmed cookie sheet pan with foil and lightly sprayed it with cooking spray.

I dipped each piece of chicken into the egg then put it in the baggie with the crushed onions.

I made sure each piece of chicken was well coated.

I ran out of crushed onions after about half of the chicken was coated and on the baking sheet.  I poured the rest of the French-fried onions into the bag and used my hands again to crush them.

I finished coating the remaining chicken pieces and placed the baking sheet into the oven.

I set the timer for 20 minutes and began preparing our side dishes.

The timer sounded but the chicken crust wasn’t very brown and the chicken didn’t appear to be done, so I let it continue cooking for another 10 minutes.

A peak into the oven let me know the chicken was ready.

Brad and I sat down at the table, he said a prayer, and we were ready to eat.  By this time, I was pretty hungry since I hadn’t eaten since that morning.

One bite of the chicken and I was sold.  It was tender, crunchy and had a good flavor.

Brad agreed this recipe is a definite nailed it.

I liked this recipe not only because it was good, but because it was so easy and quick to prepare; and there was very little mess to clean up afterward.

Even though this recipe needed more French-fried onions than the recipe called for, it’s headed to my self-made cookbook.

The next time I want supper on the table fast this is definitely something I’ll fix.

I just need to put French’s Fried Onions on my grocery list.

Brad put in a raised garden bed close to our house and decided he would experiment with growing lettuce, spinach,... read more