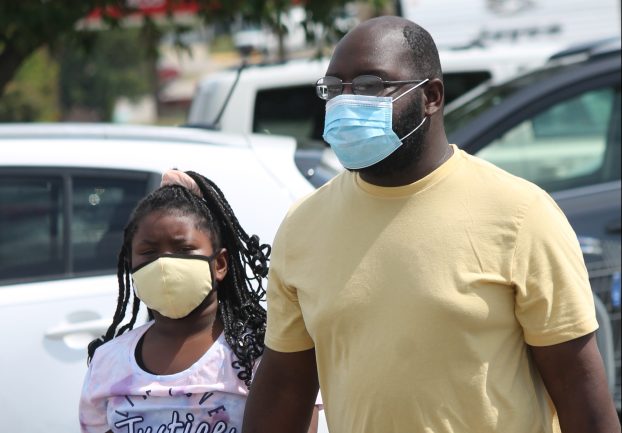 A man and girl walk to the Winchester Walmart Thursday wearing their masks, which are required in public places by an executive order of the governor. The giant retailer is also going to require customers nationwide to wear masks inside their stores.

Health Department has had 63 mask complaints

The Clark County Health Department, as of late Thursday afternoon, has had 63 complaints registered about face masks since the governor issued his order last Friday at 5 p.m. making it mandatory for people to wear masks in public places.

Some complaints have been from people complaining about customers not wearing their masks inside retail establishments and groceries, but most have involved people asking for clarification of the rules, County Public Health Director Becky Kissick said.

So far, she said, there has been only one “truly belligerent” incident, involving a customer who became upset about being denied service and threw a drink at the clerk.

Health departments have the authority to take measures up to temporarily closing businesses, but Kissick sees the local public health role mostly in terms of educating and persuading.

“We are really stressing to folks that we want to be made aware of these issues so we can reach out to those businesses,” she said.

People can also register complaints online with the Kentucky Safer Task Force through the Labor Cabinet at kysafer@ky.gov or by calling 1-833-KYSAFER.

It remains to be seen whether the governor’s order will remain in effect.

Last week, circuit judges in Boone and Scott counties halted enforcement of some public health orders Beshear had issued, and one of those decisions also prohibited the governor from issuing any further emergency orders unless he clearly stated what the emergency was, where it was and what emergency management agency had jurisdiction. An appeals judge upheld the lower court judges, and Beshear asked for a decision from the Kentucky Supreme Court by Thursday afternoon.

Wednesday, Kentucky Attorney General Daniel Cameron asked a state judge to void all of the COVID-19 orders Beshear has already issued and prevent him from issuing or enforcing any more orders. That would block enforcement of the mask mandate.

One reason Kentucky has had fewer coronavirus cases and deaths, she said, is that the state has taken the right measures to control the spread and reopen businesses safely that were closed in March.

If Cameron’s restraining order is granted, she said, “the effect of lifting all orders could be truly devastating.” This is, she said, “a matter of life and death.”

“From a public health standpoint, that is terrifying,” she said.

Lots of things look far different than they did four months ago, but The Generation Center continues to deliver meals... read more