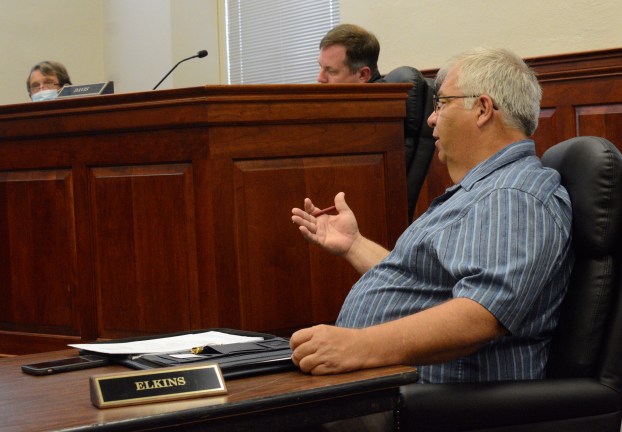 Magistrate Greg Elkins asks a question about an order to be drafted by County Attorney Wlliam Elkins regarding the settling of accounts of former County Treasurer Jerry Madden. Seated at the dais behind hiim are Magistrates Chris Davis and Robert Blanton.

Fiscal Court to vote on order to settle treasurer’s account

County Attorney William Elkins will draft an order to be presented to the Clark County Fiscal Court at its next meeting for the final settlement of accounts of former Treasurer Jerry Madden subject to the next audit.

During a special called meeting Monday morning, the magistrates approved the settlement of the accounts of Interim Treasurer Shea Champ, who resigned in June because she and her husband are relocating. That decision, too, is subject to audit.

Madden was dismissed from his job in March.

The magistrates also approved an order to name an acting county treasurer. The county is currently taking applications to fill that position.

Last summer, the city parking lot on the east side of North Main Street next to Harper’s Pawn & Jewelry... read more