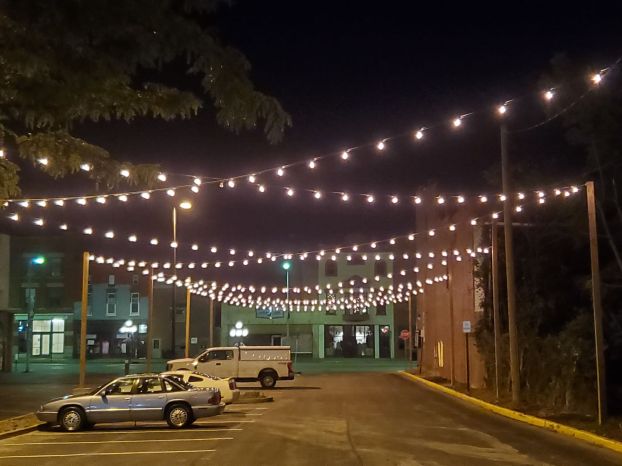 Last summer, the city parking lot on the east side of North Main Street next to Harper’s Pawn & Jewelry was overgrown and unremarkable.

Today, it’s ready to become a venue for festivals, concerts or car shows.

The space has antique-style lamp posts, a light canopy and plenty of electrical outlets for events.

The transformation is a collaboration of the city government, Rimar Electric, the University of Kentucky’s Community and Economic Development Initiative of Kentucky (CEDIK), Main Street Winchester and the Beer Cheese Festival committee, which provided $20,000 toward the costs.

The work was mostly finished two weeks ago, except for some landscaping that will be done by UK’s Winchester Design Studio downtown.

Winchester City Councilman Ramsey Flynn said that right after he was elected, he brought up the issue of overgrown bushes in the parking lot, and other city officials wanted them taken out. Public works employees took care of the cleanup.

He and a group that included City Commissioner Kitty Strode, Meredith Guy, Sherry Richardson and former Main Street Winchester Director Rachel Alexander got the idea for the overhead light canopy from similar canopies over alleys in Nashville and Hamburg Pavilion in Lexington.

Jenny Bailey and others with the Beer Cheese Festival agreed to fund it.

Guy, who chairs the design committee, gives Richardson of Howard’s Overhead Doors much of the credit.

“It was all kind of her baby,” she said. “She came up with all the ideas to redo the parking lot,” and she and Flynn started the remodeling.

“We’re trying to create an outdoor place where people can gather and where they want to gather … and that parking lot seems like a great location,” Guy said.

The city also wanted to address the issue of crime in the area, Flynn said.

“I had a retired state trooper tell me you can landscape crime away because it doesn’t feel welcome,” Flynn said.

Flynn said discussions about improving the lot began last November, but the project was delayed by weather until June.

Guy said that in addition to landscaping, the UK landscape architecture team also had plans for an interactive Twister game on the lot, but that was put on hold because of the COVID-19 pandemic. She said the group wants to get George Rogers Clark High School students involved in that part of the project.

Flynn says the refurbished lot is a nice addition to North Main, that will bring more events to the area.

He said the space now has “plenty of electric” for food trucks, a concert stage, festival booths or whatever.

“We did it right. We didn’t cut any corners,” he said.

Now, Flynn said, there is some discussion of paving the alley behind the parking lot from Washington Street to Broadway and doing something to slow the traffic there, especially now that there is a new day care on the block.

Besides the day care, there is a new Italian restaurant and another restaurant planned across the street, and Wildcat Willy’s is around the corner and across the alley. Leeds Center for the Arts also has plans for expansion, including a new rear entrance.

Things are looking up down on North Main, the Flynn said.

Local major retailers get on board with masks

Kroger, the nation’s largest supermarket chain, will require customers to wear masks inside any of their stores, including the one... read more