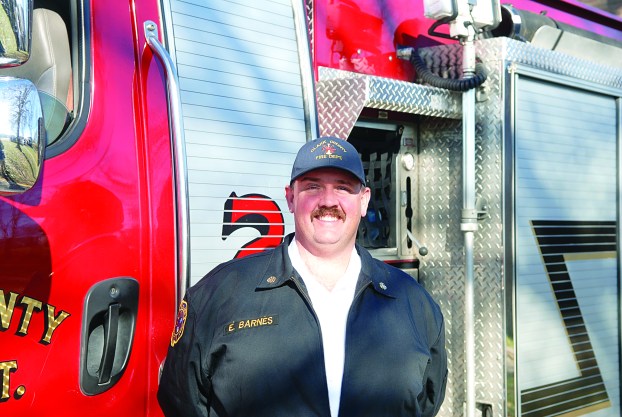 Clark County Fire Chief Ernie Barnes is set to retire at the end of the week after more than 20 years with the department. (Photo by Fred Petke)

After more than 21 years with the department, Clark County Fire Chief Ernie Barnes will hang his helmet up for the last time Friday.

Barnes, a Clark County native, is retiring effective the end of the week.

“There are a lot of factors,” he said. “I think the time was right for my family. I’m still young enough to have a second career.

“My son just graduated high school and my daughter is 13. We’re still young enough to get out and do some things.”

He started working with Jessamine County EMS, but returned to Clark County after a year when a position at the county fire department opened.

“It’s really been a blessing,” he said. “I appreciate all the opportunities I’ve had in Clark County.”

The biggest accomplishment during Barnes’ time as chief, he said, will be securing salary increases for firefighters.

“We’ve accomplished a lot,” he said. “We’ve worked with two fiscal courts to raise the starting pay (of firefighters) over 20 percent. I’ve tried to take good care of my people. First and foremost, that’s what accomplishes the mission.”

The county is also waiting on two new fire trucks for the department, which usually take a year to build.

“We have a new fire truck and a tanker on order,” he said. “That’s equipment that will serve the community hopefully for the next 15 or 20 years.”

The best accomplishment, though, is seeing the department’s successes throughout the community.

“There’s a whole lot of people walking around that we’ve helped through the years,” he said. “Some of them wouldn’t be here without our help.”

Barnes said he’s always wanted to live in the community where he works.

“When you work in your community, you have some skin in the game you wouldn’t have otherwise,” he said.

Barnes said he will be driving around the county and see reminders of the tragedies and losses from his career, but usually around the next corner is a building the firefighters saved or a family they helped.

“The thing I’m most proud of … is the number of buildings we saved and people’s homes or businesses,” he said.

Barnes said he has no immediate plans for his future, which is a little out of character.

“I’m kind of winging this one,” he said. “We’ve been putting out fires and fixing our trucks.”

The only plan, he said, is to take a little time to enjoy his family “and see what the world has to offer.”

Lady Veterans Connect got some needed help from local Scouts this month in cleaning up the grounds around its transitional... read more