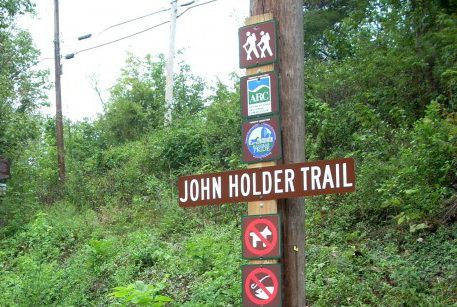 With limitations on gatherings in public places because of COVID-19, people are turning to the great outdoors as a way to keep busy amid a global pandemic, especially as trails and parks begin to reopen.

In Clark County, though, one trail was forced to close to the public once again because the public wasn’t following the rules in place to preserve a naturally and culturally historic area of the community.

The Lower Howard’s Creek Nature and Heritage Preserve announced earlier this month that the John Holder Trail has been closed to the public until further notice.

“Damage to the natural and cultural resources has occurred from overuse and disregard for the rules of the nature preserve,” a post to the preserve’s Facebook July 14 said. “Once the area has been rehabilitated, new usage guidelines will be developed. This area is being actively monitored; trespassers are subject to fines. If the temporary closure is not respected, the closure may become permanent.”

A previous post to the preserve’s Facebook page indicated that visitors to the trail, which is located next to Hall’s on the River on Athens-Boonesboro Road, were parking in undesignated parking spots, bringing pets on the trail, fishing in the creek, leaving litter, traveling off the designated trail and even leaving graffiti on rocks on the trail.

Jon Walker, chair of the Friends of Lower Howard’s Creek Board, said the trail is a “different kind of place,” because it’s part of a nature preserve and not a park.

The trail was opened as a “bit of a test,” Walker said, to explore if the public could be allowed to access the preserve.

“It was working great for a long time,” he said. “People were enjoying it. It’s a beautiful place. There’s a lot of history down there.”

But, the preserve started seeing more and more use, possibly because many other entertainment venues and public gathering places are closed right now, Walker said.

“We got to the point that one weekend, there were hundreds of people there,” he said. “And a lot of them are doing what they’re supposed to do. But others are doing things that just don’t fit with a nature preserve.”

One volunteer reported that the trash picked up along the trail was 10 times that in previous years, Walker said.

“The purpose of the preserve is to provide nature education, to preserve endangered and threatened species, and to preserve and interpret an important chapter in the history of Clark County and the Bluegrass Region of Kentucky,” the website states. “This property is home to populations of federally endangered plants, state rare plants and irreplaceable historical and archaeological features.”

Walker said the preserve was the site of one of the first communities in Kentucky, likely because of its vicinity to the settlement at Fort Boonesborough, and is home to a threatened plant species, the running buffalo clover.

The trail is on the land settled by Kentucky pioneer Col. John Holder, according to the LHC website. It’s a 1.4-mile trail that follows segments of old roads including Athens-Boonsboro Turnpike, the Salt Springs Trace and Holder’s Road.

Previously, the trail was open to the public from sunrise to sundown. All other parts of the preserve can only be visited during scheduled guided hikes.

Walker said the board wants to explore ways to reopen the trail in the long-term, but right now, it’s important to protect the cultural and natural resources there, and the public can help do that.

“First, just abiding by the rules and principles of the nature preserve could be really helpful,” he said. “If someone is interested in helping at the preserve or learning more about it, a group of volunteers meets each Tuesday at 9 a.m. to take care of the trails. It’s a fun time. We work for about three hours and then have a picnic lunch. They might gain a new appreciation for the preserve.”

Walker said the preserve offers guided hikes usually in the spring and fall during which the public can also enjoy the trail and gain more understanding of the area.

For more about the trail and the preserve, visit lowerhowardscreek.org.

Cairn Coffee House and The Freeman Corporation are home-grown Winchester businesses owned and operated by people whose families have been... read more