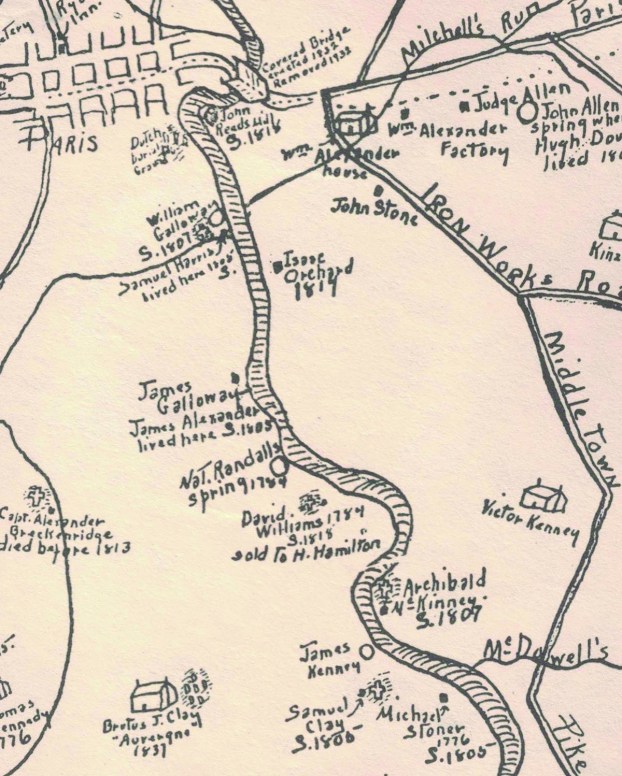 Michael Stoner’s 1,400 acres, shown at the lower right, on the west side of Stoner Creek. Dr. Henry Clay’s son Samuel lived and died on the tract. Map by Alice Rogers Clay Blanton, 1934.

Where in the World: Who was Michael Stoner?

Living in Clark County, we should know Michael Stoner, an early pioneer who left his name on two of our streams:  Stoner Creek and Stoner Branch. His story unfolds during the first settlement of Kentucky.

Michael Stoner was born Michael Holsteiner of German parents near Philadelphia in 1748. When about sixteen he struck out for the New River of Virginia and eventually made his way to Fort Pitt. There, in 1767, he joined Samuel Harrod (older brother of James, founder of Harrodsburg) on a trek to the Illinois country, Kentucky and Tennessee before returning to southwestern Virginia, where he became acquainted with Daniel Boone and Billy Bush. Stoner and Bush both accompanied Boone when the latter attempted to settle his family in Kentucky in 1773. That mission was aborted when Boone’s son James was killed by Indians.

In April 1774, open hostilities broke out on the western frontier after the murder of several Indians. Among the victims were Chief Logan’s father, brother and pregnant sister. Logan had been noted for his friendship with Virginians. The Mingo under Logan and Shawnee under Cornstalk retaliated, killing whites and taking captives, precipitating what came to be called Dunmore’s War.

Kentucky was part of Fincastle County, Virginia, at that time. Capt. William Russell, who lived in the Clinch River settlements in southwestern Virginia, sent two scouts to Kentucky looking for signs of Indians. The pair — David Gass and Michael Stoner — made it as far as present-day Stanford and returned without seeing anyone.

Several parties of surveyors were in Kentucky laying off land for officers who had served in the French and Indian War.  They were known to be working in the Bluegrass area and near the Falls of the Ohio (present day Louisville).

After new reports of hostilities, the governor ordered that someone be sent out to warn them. Capt. Russell selected Daniel Boone for the assignment, and Boone picked Michael Stoner to accompany him. They were directed to cross the mountains at Pound Gap, descend the Kentucky River, and if the surveyors were not found there, to proceed on to the Falls. Their mission was “to bring the surveyors in.”

It turned out that the surveyors had left the Falls and divided into three groups, one working on the North Fork of the Elkhorn, one on the South Fork and one on Hickman Creek, south of today’s Lexington. To give an example of the area involved, John Floyd’s group on the North Fork ranged from near Frankfort almost to Winchester. What the Virginians did not know was that Indian attacks had already caused the surveyors to head for home.

Can you imagine? I cannot. Kentucky was then a trackless wilderness. Boone and Stoner had both hunted there and knew their way around, but the area to search was immense. What if you were asked to take your car and go find someone who had broken down on a highway somewhere in the Bluegrass? Challenging. And they didn’t have highways or cars.

Boone later reported that the surveyors in the Bluegrass had been “well drove in by the Indians,” so they continued on to the Falls. Not finding them there, they started home by way of Cumberland Gap. They overtook one group of surveyors while on the way back.

According to Boone, “We complied with the Governor’s request, and conducted in the surveyors, compleating a tour of eight hundred miles, through many difficulties, in sixty-two days.”

The following year, Stoner accompanied Boone again, this time blazing a trail from the Sycamore Shoals to Boonesborough for Col. Richard Henderson and the Transylvania Company. Stoner resided there for several years and was seriously wounded in an Indian attack at the fort in 1777.

Stoner was described as “a short, chunky man” of great endurance. He spoke with a thick German accent. He was one of the hunters at Boonesborough who supplied the fort with meat. His brother-in-law stated, “Stoner was an indifferent hand to shoot at mark.  I could beat him. But at game, he was the best man in Kentucky. Seemed to understand the motions of living animals.”

Another story was told of Stoner on a hunt with his friend Billy Bush. Stoner poked a stick in a large hole in a tree trunk, saying, “Who keeps de ouse (house)?” It turned out the housekeeper was a she bear with her cubs who advanced upon him in a hostile way. Stoner retreated while calling on Bush, “Shoot, vy don’t you shoot Pilly Push, vy don’t you shoot Pilly Push?”

Stoner made an early land claim on a fork of Licking River, where he built a cabin and planted corn in 1776. The land, 1,400 acres in all, was about four miles southeast of Paris, and the fork became known as Stoner Creek. He sold this claim to Dr. Henry Clay of Bourbon County and acquired a farm in the Bush Settlement. This 96-acre tract straddling Bybee Road was situated on a small stream still called Stoner Branch, a tributary of Fourmile Creek.

Michael Stoner married Frances Tandy Tribble, eldest daughter of Rev. Andrew Tribble. He was 38, she was 17.

Stoner had a good many adventures. He accompanied Billy Bush and others in search of Swift’s “lost” silver mines. In his later years he spent two years hunting and trapping in Missouri, part of the time in company with Daniel Boone.

Michael Stoner’s 1,400 acres, shown at the lower right, on the west side of Stoner Creek.  Dr. Henry Clay’s son Samuel lived and died on the tract.  Map by Alice Rogers Clay Blanton, 1934.

Approximate location of Stoner’s farm in the Bush Settlement (blue circle if color or gray circle if b&w).

Sources (not to include)

Where in the World: Winchester heroes at Santiago

By Harry Enoch The Winchester Democrat of Oct. 11, 1898, carried an article about local servicemen in Cuba during the... read more