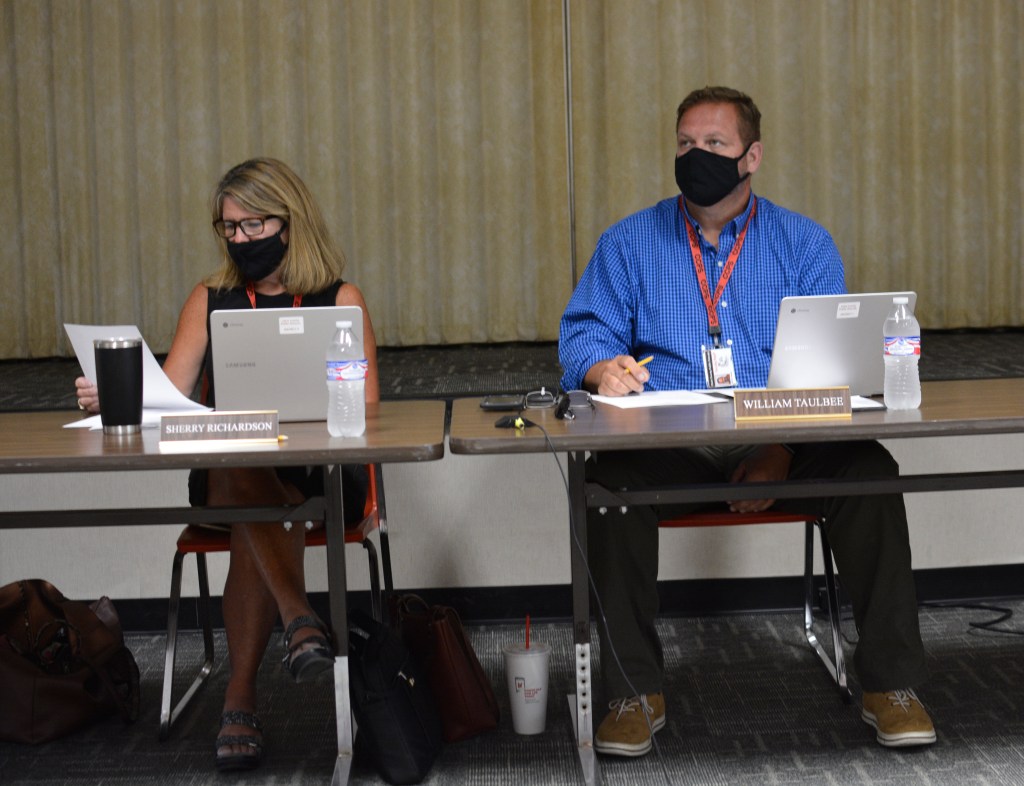 Board Members Sherry Richardson and William Taulbee listen to testimony from teachers.

Clark County public school students will still be returning to classes Sept. 8, but not to classrooms.

During an emergency meeting Monday night, the Board of Education voted 3-2 for the first nine weeks of school to be by distance learning. The board will re-evaluate that decision, however, at its first regularly scheduled meeting in September.

It was the recommendation of Superintendent of Schools Paul Christy and Clark County Public Health Director Becky Kissick that classes be online for the first nine weeks, and Christy suggested that the situation be re-evaluated after 30 days.

Kissick cited the recent rise in COVID-19 infections in Clark County and Kentucky and concerns that reopening schools now could make those numbers go even higher.

She said that while the percentage of people in the state who are testing positive has gone down slightly in recent days, it is currently at 5.43, and anything above 5 is a “red flag.”

Several teachers, including one who was pregnant and feared for her  unborn child and her 4-year-old, said they weren’t comfortable going back to school yet.

The teachers expressed concerns for the health and safety of the children, their families and school employees.

“Some teachers and some students will not make it through this,” Kiley Jones, a teacher at Robert D. Campbell Junior High School, said.

No one in the audience spoke in favor of resuming in-person classes.

Board Member William Taulbee’s motion was also approved by Scott Hisle and Ashley Richardson, the chair. The no votes were Sherry Richardson and Gordon Parido.

“We know it’s not the best scenario,” Taulbee said. “I really want to have kids in classrooms. But with the increase in cases, right now there’s just no way” that he could feel good about them going  back to class.

The board had earlier decided this summer to resume all in-person classes at the same time but allow those whose parents didn’t feel comfortable with them going back into school to opt for virtual learning and non-traditional instruction instead.

In a survey before the board vote in early July, about one-third of parents preferred that their children not return to in-person classes. The numbers were lower then than now.

When on-campus classes do resume, Christy said, it may be that not all students will return at the same time.

Hisle had suggested that if the first nine weeks were going to be online, school officials should consider starting sooner.

But Christy, Taulbee and others said they would prefer to give teachers, parents and students enough time to learn a new online platform, and Christy said he wanted to have new Chromebook laptops for students delivered before classes resume.

He also wanted to give working parents an opportunity to make arrangements for having their children at home.

“I just want to give parents ample time to prepare, because this does affect people,” Christy said.