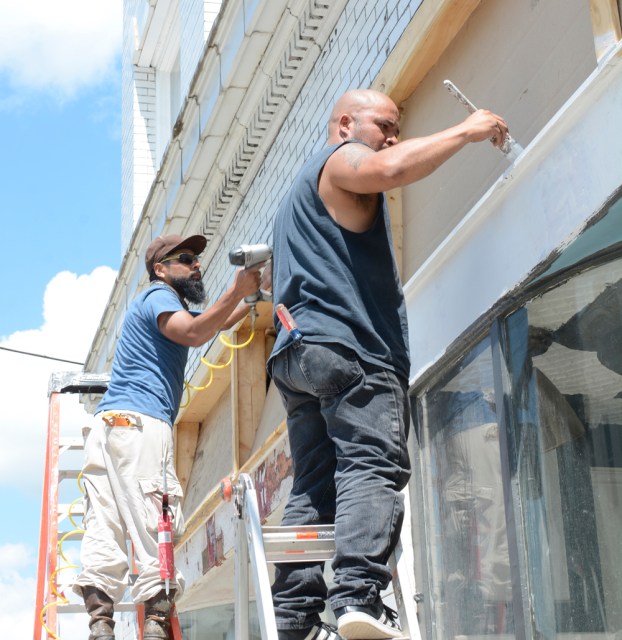 Saul Hernandez, front, and Oscar Navarro, rear, work on the front of the McEldowney Building at 5 Cleveland Ave. Monday morning. The six-story structure built in 1906 is undergoing a major renovation.

McEldowney gets a makeover

The McEldowney Building, Winchester’s tallest and once one of its proudest old buildings, has seen better times, but its best may still be to come.

The nearly 32,000-square-foot, six story structure that towers over Cleveland Avenue across from the Clark County Courthouse and next to the Justice Center is getting an extreme makeover.

Three young property developers — Adam Kidd and cousins Demetrius and Matthew Fassas — bought the building last September from Tom Goebel & Co. and having been working to restore it to its original grandeur.

The owners of the McEldowney building and a former bank around the corner on Main Street, are converting both into retail space on the ground floors and professional office space and luxury apartments above.

Although the McEldowney has been restored a few times since it was built by M.T. McEldowney in 1906, this is the first major renovation it has seen in nearly 30 years, Kidd said.

On Monday morning, Kidd, who is from Pikeville and lives in Lexington, was working on the front of the building with two other men, Oscar Navarro and Saul Hernandez, giving it a facelift.

“We’re bringing it back to life,” he said.

There are offices already on the second floor, including those of Clark County Attorney William Elkins. It’s nearly “at capacity” now, Kidd said. There is currently an apartment that’s occupied on the fourth floor and two more are going in. The fifth floor will be a penthouse. “That’s our winter project,” he said.

“We’ve put in new infrastructure — new electric, new plumbing, the first heating and air system it’s ever seen has gone in. We’re stripping it back to the original. We’ve restored the hardwood floors and the window frames and all the old doors upstairs,” he said.

They’ll also be replacing a 40-year-old elevator and refurbishing the staircase with its marble steps and brass banisters.

By the time it’s finished, he said, they’ll have sunk about $1.5 million into the building — maybe more, depending on what tenants want.

Their ground floor tenant, he said, will be May Tide Mercantile.

“It’s almost a fashion design studio. It’s an intellectual archive of over 100,000 pieces of clothing … and they’re inviting artists from all over the world to come and browse the archives and work with the designers here on those pieces,” he said.

Kidd said he and his partners decided to buy and restore the building because it’s what they do across the country, and they liked what they saw happening in downtown Winchester.

“There were so many great projects going on in Winchester, and we were looking at surrounding cities around Lexington,” he said.

After meeting other local developers, he said, they decided they wanted to develop here.

“We felt that Winchester was getting ready to take that next big step forward, and we just wanted to be part of it, he said”

Local organizers are planning gathering Saturday to be part of a national event on streets named for  the Rev. Martin... read more