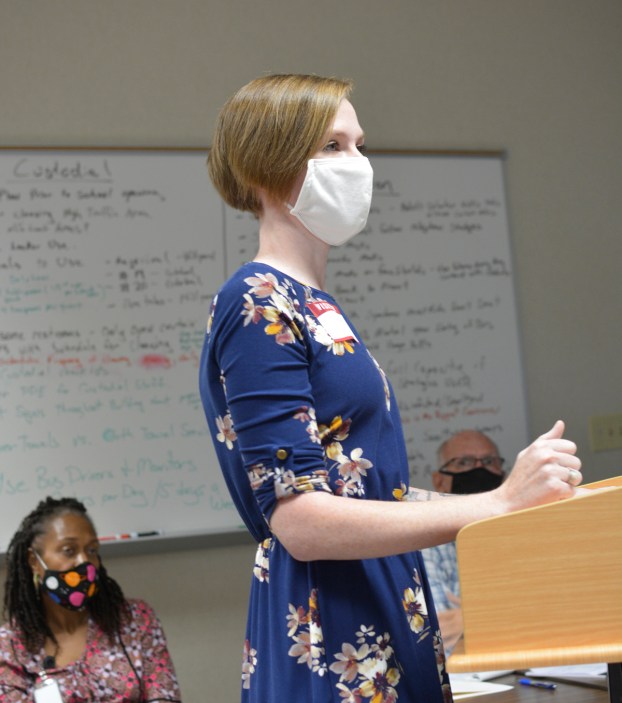 Kylie Jones, a teacher at Robert D. Campbell Junior High School, told school board members that when children do return to their classrooms, it won't be the normal learning experience some parents may expect because they will have to be socially distant from their teachers and each other.

When Clark County school board members met Monday night to decide whether to delay the start of in-person classes for the fall semester, they faced a roomful of teachers wearing face coverings and seated several feet apart.

Before the board and Superintendent Paul Christy discussed the question, they heard from the teachers, who all agreed.

They were not ready to risk their health or that of their students or families.

One by one the teachers stood at the podium and made their case.

Erin Newton, an English teacher at George Rogers Clark High School, said the numbers of coronavirus cases have been increasing, both in the state and in Clark County. On July 27, 21 cases involved children 5 years old or younger.

She noted that Dr. Deborah Birx, the White House coronavirus response coordinator who last week told Gov. Andy Beshear she had concerns about the rise in cases in the state, has said the country has moved into a new phase in which the often deadly virus is what she called “extraordinarily widespread.”

Newton cited Beshear’s daily news conference Monday in which he recommended that all public and private schools in Kentucky wait until mid-August to give the state more time to get the virus under control.

Brent Sizemore, chair of the social studies department at GRC, said there will be an increase in cases if on-campus classes resume too soon, and suggested Clark County follow the example of other counties, such as Fayette, in going digital for the first weeks.

Amanda Crowell, a social studies teacher at GRC, said returning would be “almost be too heavy a burden to carry” for teachers to do everything expected of them in such circumstances.

Brian Foudray, a GRC English teacher and president of the Clark County Education Association, asked on behalf of the teachers union that the board approve non-traditional instruction only for the first couple of weeks of school or a hybrid model like Montgomery County’s.

He also asked that teachers not have to use sick time or unpaid leave if they have to be absent because of COVID-19, the illness caused by the novel coronavirus, and that the school district develop policies on cleaning, quarantining and wearing face coverings.

Foudray suggested that even if a quarter or so of parents opt for virtual learning for their children throughout the semester, there would not be enough room to space the remainder of the students six feet apart.

“Social distancing is impossible in the normal classroom with the number of students we have,” he said. “I don’t think I can fit 24 kids in a class, and I have anywhere from 30 to 33.”

Kait Greenwell, the mathematics department chair for the high school, said that when students do return to classes, it “will not be anything close to normal.”

“I know that’s what the kids want, but that is not what they will be facing when they come back into our classrooms,” she said.

Students will have to wear masks all day, and teachers won’t be able to circulate in the classroom and work one-one-one with them, she said.

Greenwell said she is pregnant and her baby is due in September. Going back to class Sept. 8, she said, would risk infecting her newborn and her 4-year-old.

She suggested virtual learning would work better than it did at the end of the last school year, when students were sent home in March.

“I had less than 24 hours to prepare for NTI, and in that process, I learned so much about myself and my students,” she said. “Imagine what we could do with a month to prepare.”

Superintendent Paul Christy said later that if classes start online, he doesn’t want to start them earlier than Sept. 8 because he wants enough time for teachers, students and parents to become familiar with an a new online learning platform that will be implemented and with the Chromebook computers students in grades 3-12 will be issued.

“My number one priority is to keep students safe, even above education,” Jill Jonas of Robert D. Campbell Junior High School, said. “Asking students to go back into the classroom where we have the potential to spread COVID-19, a potentially deadly disease currently causing a global pandemic, to our students or loved ones, is asking too much of us.”

“I can’t imagine the pain it would cause me if I were personally responsible for the death of one of my students or a family member,” she said.

Kylie Jones, also a Campbell teacher, said she is “not comfortable coming into a building with hundreds of people” when she can’t know whether they have been doing what they should to stay safe.

“All I know is that some will die. Some students and some teachers will not make it through this,” she said. “It’s not a risk I want to take with my own child, who will be in first grade this year.”

Jones said she understands it puts working parents in “a bad position” to have to stay home with their children, but it’s necessary.