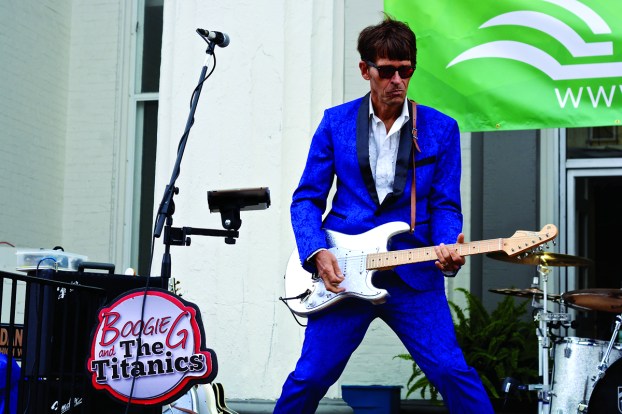 Dan Trisko plays the guitar and sings vocals for Boogie G and the Titanics during Rock the Block on Main Street in 2019. (Photo by Lashana Harney)

Rock the Block postponed to September

The Main Street Winchester board had hoped to start its summer concert series next weekend.

The decision was made this week to hold off on the festivities for another month.

Main Street Winchester board chairman Tim Smith the members felt it was better to be safe than sorry. Board member and city commissioner Kitty Strode told the Winchester Board of Commissioners Tuesday there would be no children’s festivities and the crowd would be spaced appropriately on Main Street.

Smith said the health risks remained, though. He said the board spoke with Clark County Health Director Becky Kissick, who shared some concerns and statistics.

“I think the best thing is to be cautious,” Smith said. “We can hold things down the road.

The decision also affected the annual Sip and Stroll event among downtown merchants, where local wineries will offer samples, he said.

New dates have not been set, but there are several possibilities in September, he said.

The Rock the Block series is a series of four monthly concerts, beginning in May, in the steps of the Clark County Courthouse.

“We have always kept our options open,” Smith said. “Obviously, May was a given (for cancelation) and June. We haven’t given up the option of doing one or possibly two before the year’s end.”

Clark County public school students will still be returning to classes Sept. 8, but not to classrooms. During a special... read more