More than 40 COVID cases reported in past week

The Clark County Health Department has reported more than 40 new cases of the coronavirus in the past week.

According to the department’s daily reports of cases:

— one new case was reported Saturday 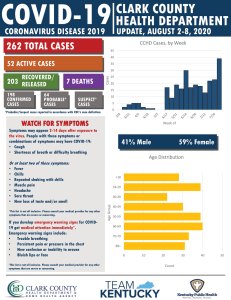 Of those cases, 47 are active, and six more people have met criteria for recovery.

The department also reported that one case has been transferred to another county.

COVID-19 has been a contributing factor in seven deaths in Clark County.

As Clark County sees a steady increase in the number of cases, so does Kentucky overall.

Of the new cases reported over the weekend, at least 50 involved children younger than 5.

There have been 775 deaths attributed to the virus in Kentucky.

As of Monday, there were 641 people hospitalized with the virus, with 155 of those in intensive care units.

As of Monday, the positivity rate was 5.17 percent, and more than 700,000 Kentuckians had been tested for the virus. Over the weekend, the rate had reached more than 6 percent.

There have been at least 8,738 people who have recovered from the virus in the state.

As of Aug. 9 the cases reported by age range include:

Nearly a fourth (23.11 percent) of all cases have been Jefferson County residents, which includes Louisville, Kentucky’s largest city.

In other neighboring counties, the following number of cases had been reported as of Aug. 9:

Also on Monday, Beshear announced that bars and restaurants would be allowed to reopen to the public at 50 percent capacity on Tuesday, but asked that they stop serving drinks at 10 p.m. and close at 11 p.m.

He also asked school districts to postpone in-person instruction until Sept. 28. In Clark County, the Board of Education decided last week to use a virtual learning model for at least the first nine weeks, starting Sept. 8.

A travel advisory remains in effect with the recommendation of a 14-day self-quarantine for travelers who went to any state reporting a positive testing rate of 15 percent or more. As of Monday afternoon, those states included Washington, Texas, Florida, Idaho, Mississippi, Alabama and Nevada.

For more information about COVID-19 in Kentucky, visit kycovid19.ky.gov.

The Clark County Health Department has received close to $150,000 in CARES funding as of the first week of August.... read more