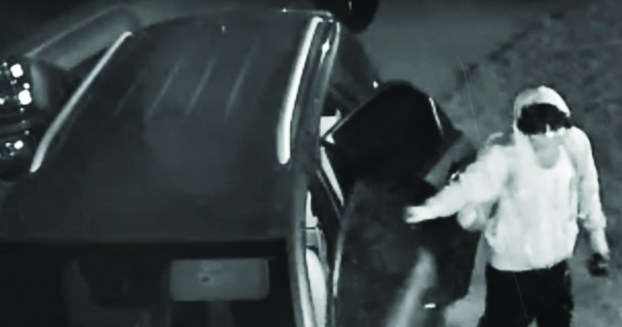 A screenshot from surveillance footage shows someone breaking into a vehicle around 2 a.m. Aug. 6, according to the timestamp on the image. Police are investigating a string of thefts and burglaries from cars in a couple of local neighborhoods. (Photo provided by Paula Payton)

Police are investigating a string of thefts and burglaries from cars in a couple of neighborhoods late last week.

In the overnight hours of Aug. 4-5, someone broke into a number of vehicles in the Earlymeade subdivision and others in the area.

“We have a couple leads we’re following up on,” he said.

Runnymeade Drive resident Paula Payton said she knew of at least five vehicles on her street which were burglarized, and she had heard of more in other neighborhoods.

Craycraft said he didn’t know if the burglaries were related or not.

“Hopefully our detectives will make an arrest soon,” he said.

In the meantime, simple actions can help prevent more break-ins, he said.

“It’s best to lock your cars and not leave anything in your car,” he said.

Clark among Top 10 for census response