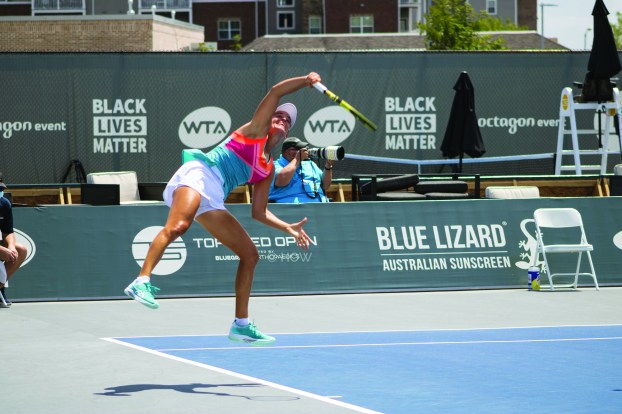 Jennifer Brady leaps for a return during the finals of the Top Seed Open in Nicholasville Sunday. She won the WTA singles title of the tournament, defeating Jil Teichmann.

The attention of women’s tennis enthusiasts around the world turned to Kentucky this past week as the Top Seed Tennis Club in Nicholasville hosted a major international competition.

The Top Seed Open, presented by Bluegrass Orthopaedics, was the first Women’s Tennis Association event to take place in the U.S. since the coronavirus pandemic shut down the tour in March.

The tournament featured some of the sport’s biggest stars, including sisters Serena and Venus Williams, who faced off against each other for the 31st time (Serena won); Victoria Azarenka, the former No. 1 ranked player in the world; and 16-year-old Coco Gauff, the youngest player ranked in the WTA top 100.

“It feels great,” Brady said when asked by a reporter during a Zoom press conference. “You know, there’s only one winner each week, so to walk away with that trophy … for the first title in America, I’m unbelievably happy.”

Brady said she always wanted to win a WTA title, and “everything I’ve imagined, it’s definitely a reality.”

Winners of the doubles title were Hayley Carter of the U.S. and Luisa Stefani of Brazil, who defeated Marie Bouzkova of the Czech Republic and Teichmann 6-1, 7-5.

The tournament, held Aug. 10-16 on hard courts at the indoor tennis facility in Brannon Crossing, aired on the Tennis Channel, which attracted its most viewers since the coronavirus outbreak began in the U.S. in March.

The tournament was held without spectators, and media access was limited, with player press conferences held by videoconferencing.

In a video on the Top Seed Tennis Club’s Facebook page, Jon Sanders, tournament director, and others described the health protocols that were in place to keep the players and others safe and at ease, including social distancing during training and practice, COVID-19 testing every time anyone entered the facility, requiring masks and having hand sanitizer everywhere.

The tennis club, which opened in March 2018, has 21 courts and has hosted junior tournaments, the PanAmerican championships, Division 3 indoor nationals, and University of Kentucky tennis.

“We’re really excited to take the next step,” Sanders said, adding that he hopes “this turns into a long partnership with the WTA.”

“Our goal is to grow the game of tennis, and what better way to showcase tennis than to bring it to this state and to have the incredible star-studded field we have,” he said. “It’s an honor and a great responsibility as well.”

‘Our kids want to play,’ Barnhart says of Cats