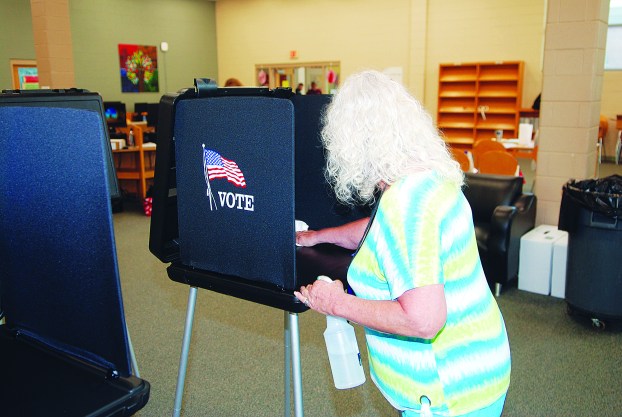 Sandi Gilchrist wipes down one of the voting booths at Campbell Junior High School during the June Primary Election. The library had three electronic voting stations and more than a dozen for paper ballots. More polling locations are expected for the November General Election. (Photo by Fred Petke)

There will be more in-person voting locations on election day this November, though Clark County’s exact plan is still in the works.

On Friday, Gov. Andy Beshear and Secretary of State Michael Adams announced new procedures for the Nov. 3 general election, which include continued absentee voting where anyone can request a ballot, early voting beginning Oct. 13 and at least one voter “super-center” per county where anyone can vote in person.

“We can have more polling places,” she said. “I’ve not come up with a plan yet. Our problem is we have to have one super center. That would be like having Trapp (Elementary) open. If you live in town, you could go out there and vote.

“There will be more than one polling place. We don’t know how many.”

Adams said the online portal to request an absentee ballot should be up shortly, but Turner said her office has already received about 100 requests for absentee ballots. Ballots can be requested through the portal until Oct. 9, according to a statement from Beshear’s office.

The plan also allows for early voting beginning Oct. 13, where any one can vote early for any reason. County clerks offices are required to provide a safe location for early voting every week day and four hours on each Saturday.

Turner said her office is already open on Saturdays from 9 a.m. until noon, so they will open an hour earlier for those three weeks leading up to the election.

County clerks will also determine locations in the county for drop boxes, where voters can return their mail-in ballots to avoid postal delays.

Turner said her office won’t have its ballots until September.

In addition to the presidential and U.S. Senate races, the Clark County ballot will include a state representative race between Republican Ryan Dotson and Democrat Kenny Blair.

Seven candidates will be on the ballot for the four seats on the Winchester Board of Commissioners: incumbents JoEllen Reed, Ramsey Flynn, Shannon Cox and Kitty Strode, and challengers Kenny Book, Sam Williams and Hannah Toole.

Heather Penichet, Brenda Considine and Patricia Stewart-Hopkins have all filed for Hisle’s seat.