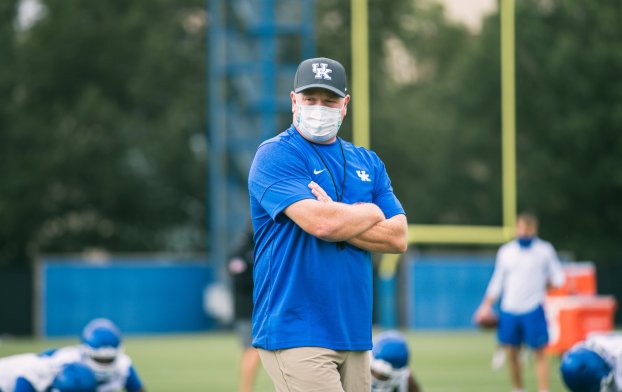 LEXINGTON, Ky. (KT) — Kentucky coach Mark Stoops wants to do whatever it takes to make sure his team is prepared when the season begins late next month.

“We’re guaranteed 10 opportunities at this point and we’re gonna work around the clock (to make that happen),” Stoops said Tuesday. “(We’re going to have) a relentless pursuit to have our team prepared each and every week.”

Kentucky quarterback Terry Wilson, who missed most of last season because of a knee injury, was glad to be back on the field for his first full workout with the team in nearly a year.

“Even with all of the restrictions that we are going through right now, it just felt really good to be back out there with everybody, start back up and get the rust off of us and just keep getting better,” he said. “Everybody is just excited to be out there, play hard and do what we’ve got to do. It’s been a long summer, a lot of uncertainty and I feel like just being able to go out there and practice (is good).”

Stoops admitted this season will be unlike no other because of the COVID-19 pandemic, but also wants to make sure the Wildcats are ahead of the curve going into the season opener on Sept. 26 at Auburn.

He said the league-only schedule will challenge his squad more and added that his team’s depth will help prepare the Wildcats for the task at hand.“We can learn from past leaders. (Like) General (George) Patton said, ‘I am a soldier. I fight where I’m told. And I will win where I fight.’ That’s going to be our approach. Prepare as a team each and every week to be ready to go, to be ready to prepare to win. We’re going to take that approach every day.”

Stoops said players can opt-out of camp with no penalties or repercussions but said none of his players had chosen that option going into the first week of practice.

Overall, Stoops said six players have tested positive for COVID-19 antibodies and none were positive upon an initial return to campus last June.

“We’ve been very fortunate,” he said. “I thank our players. I think our players have done an exceptional job adhering to the advice we’ve given them and stayed as safe as possible. That’s evident through the testing we’ve done this year. We have very few positives.”

Like Stoops, the players feel safe in their own environment.

“I wouldn’t want to be anywhere else,” Wilson said. “What we have going here is safe. We’re doing the best job that we can to be able to play and have a season.”

Kentucky is still waiting to hear on the status of Auburn transfer quarterback Joey Gatewood, who appealed to the NCAA for immediate eligibility in July.

“I’ve not heard yet on that,” Stoops said. “We’ve turned in everything necessary. We expect an answer here soon. I don’t think it’s appropriate for me to speculate at this point in time.”

If Gatewood becomes eligible, he likely will be a backup to Wilson.

Also Tuesday, Stoops announced the addition of  Torrance Davis to the 2020 roster. He will be eligible to play this fall and will play linebacker.

“He is a two-way player who can play linebacker or running back and with our need at inside linebacker, Torrance agreed to start inside,” Stoops said. “He’s a very versatile player with a lot of play-making ability.”

Davis, 6-foot-2, 222, rushed for over 900 yards as a running back and added another 500 yards when playing wide receiver as a senior at Garfield Heights High School last year.

The attention of women’s tennis enthusiasts around the world turned to Kentucky this past week as the Top Seed Tennis... read more