CONDLEY: Apple dumplings are a big hit with friends

Company was coming (our friend Shiela, who I mentioned last week), and I wasn’t going to pass up an opportunity to make a dessert.

I’d found Granny Smith apples in the sale bin, so I started my search for the perfect apple dessert as the grand finale to our upcoming meal.

I’d copied this recipe for apple dumplings from a magazine. Unfortunately, I didn’t capture the magazine title or the issue date when I copied it.

I chose this recipe instead of making an apple pie because it only made six servings. I didn’t want the leftovers from a pie sitting around the house tempting me to eat it. 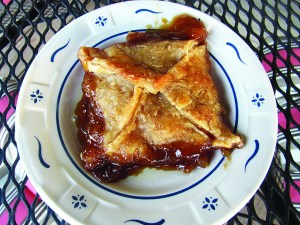 In a bowl, combine the flour and salt; cut in shortening until crumbly. Gradually add water, tossing with a fork until dough forms a ball. On a lightly floured surface, roll out dough to a 12-inch by 18-inch rectangle. Cut into six squares.

Place 1/3 cup chopped apples in the center of each square. Brush edges of dough with water; fold up corners to center and pinch to seal. Place in a greased 13-inch by nine-inch by two-inch baking dish. Bake at 350 degrees for 30 minutes.

In a saucepan, combine the brown sugar, water and butter; bring to a boil, stirring constantly. Remove from the heat. Pour over dumplings. Bake an additional 25 to 30 minutes or until apples are tender. Serve warm with ice cream.

Saturday afternoon, I gathered all of the ingredients and placed them on the counter.

I made the dumpling dough, rolled it out to a 12 by 18-inch rectangle and covered it with a tea towel so it wouldn’t dry out while I peeled, cored and sliced the apples.

I’d purchased nine apples and ended up only using two of them for this recipe. They were large apples.

I uncovered the dumpling dough and cut it into six squares. I placed the apples in the center of each square and then brushed the edges with water. Next, I folded up the corners so they all met in the middle and pinched the edges together forming cute square dumplings.

But I thought, “It’s not about how pretty they look, it’s about how good they taste” right?

Into the oven they went for 30 minutes.

At this point, I started wondering if this dessert would be very sweet because the apples didn’t contain any sugar and Granny Smith’s can be pretty tart. I was hoping they would come out well.

While the dumplings were baking, I started putting together the caramel sauce on top of the stove.

The brown sugar, water and butter went into the pan and came to a boil. I didn’t stir it constantly, but I did stir it a lot. Once the sauce came to a boil, I removed it from the stove.

When the timer sounded for the dumplings that were in the oven, I opened the oven door, slid the oven rack that the dumplings were on out and poured the caramel sauce over the half-baked dumplings. It sure looked like a lot of sauce on top of those dumplings.

I slid the dumplings back into the oven and set the timer for 25 minutes. Then I got busy cleaning up the mess I’d made.

When the timer sounded, I pulled the apple dumplings from the oven. They looked good and smelled even better, but the true test would come later when we tasted them.

Shiela arrived, we had good conversation and a good meal, and we were ready for dessert.

The dumplings had been out of the oven a bit and to ensure they were warm when we ate them, I’d placed them in the warm oven to heat back up.

I brought the baking pan to the table, along with the ice cream, and scooped out one dumpling for each of us. We all added a bit of ice cream to the side and dug in.

I took my first bite and I realized there had been no need to worry about the sweetness of these dumplings. The caramel sauce made up for the tartness of the apples.

This dessert was loved by all three of us.

It was delicious, and the only thing Shiela said besides how good they were was that they should have been smaller because she ate too much.

I tried to get Shiela to take at least one apple dumpling home with her but she refused, so I placed them in the refrigerator until the next evening.

Instead of eating the remaining three dumplings we decided to share with our neighbors Chris and Rachel.

Placing them in the refrigerator was probably a mistake because I had a terrible time getting them out of the pan to take to Chris and Rachel.

I don’t know if it was because the caramel sauce hardened or if it was because I’d put them back in the oven to warm up after they cooked and the sauce thickened too much. Either way, they didn’t look pretty after I dug them out of the pan but I hoped they would overlook that when they tried them.

I was right. Rachel and Chris didn’t care what they looked like and they enjoyed them as much as we did.

This great little dessert recipe is a hit and a nailed it in everybody’s book. Another recipe is headed to my self-made cookbook.

Oh, and I still had apples left so I headed back to my stack of recipes to make yet another dessert. Yummy Yummy.

When our friend, Shiela, came over for ribs on the grill a couple of weeks ago (along with the roasted... read more