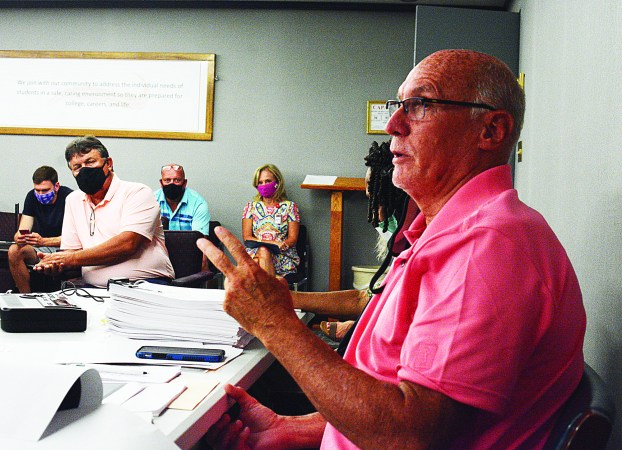 Superintendent Paul Christy talks about plans for how the school district will teach and care for students during non-traditional instruction and to transition to returning them to the classrooms.

When parents shared their thoughts with the school board about students returning to campus, one of the recurring themes was they wanted to know whether there is a plan for transitioning from virtual to in-classroom learning.

There is, but it is constantly changing as circumstances change.

After parents addressed the Clark County Board of Education Monday night, Superintendent Paul Christy said he wanted to form a new task force that includes parents, public health professionals, pediatricians and others to look at those plans.

He also said he wants to share health data from the Clark County Health Department with board members every week, and he went over some of the current suggestions an academic re-entry team.

“I’m hopeful that when we come back here Sept. 21, we can talk about bringing kids back,” Christy said. “I hope we don’t have to wait nine weeks.”

The superintendent was referring to his recommendation and the board’s decision Aug. 3 to have the first nine weeks of school be virtual learning only because of a rise in coronavirus infections, but they also decided to re-examine the data every 30 days beginning Sept. 21 and reconsider their decision based on what it shows.

Christy began his talk to the board by going over the most current information provided by the Health Department, which led to his recommendation, supported by the county’s public health director, to delay in-person learning.

“There are some things that are concerning, but also understand it’s all fluid,” he said.

Christy noted that the number of COVID-19 cases involving nursing homes has gone down in recent weeks, but that the number in the community at large is going up, and a big part of that increase involves children.

“In the age distribution in Clark County alone, under 18 is the second highest number there is … behind 60 to 69” years, he said.

He showed a bar graph that showed a sharp rise from 27 to 85 cases in May to June, 88 in July and 76 already this month.

“We’re only halfway through the month of August,” he said and the numbers are on track to far exceed those of the past three months.

As for non-traditional instruction, which includes online or distance learning, Christy agreed with parents’ criticisms of problems that occurred when teachers had to quickly implement it with little notice in March when schools closed because of the deadly virus.

“We got thrown into this in a 24-hour period last year. … We didn’t even have NTI here in the past, so we weren’t prepared to do online instruction at all,” he said.

But educators learned from that experience, and the school district has implemented changes, including having all grades operate on the same Google online platform, purchasing Chromebook laptops for students, 450 of which were to be delivered the next day, he said, and supplemental curriculum to help teachers with online instruction, although the teachers themselves would be in charge of planning the lessons, and the supplements would be just that, he insisted.

“We’re going to start off better than we ended last year,” he said.

Another concern parents had was teachers not being able to know what problems kids were having because they weren’t seeing them in person. But the school district intends to address that in various ways, including putting counselors or school psychologists on the school buses that deliver meals to the students out in the community.

“If we see the students not completing work” and making the contacts they should be, he said, “we can actually put eyes on those kids … and a counselor can talk to them.”

Christy said there would be one bus that has only counselors and psychologists on it, and they’ll be able to tell which students are struggling and need help, or which ones the schools aren’t hearing from, and can make arrangements to meet with them on the bus, one or two at a time, to talk through their issues.

Another innovation, the superintendent said, is to have a STEM (science, technology, engineering and math) bus that will offer in-person instruction.

Clark will be only the third school district in the state to have that, he said.

The superintendent said they will also be able to bring small groups of students who need additional help into a school auditorium or library, keeping them 20 feet apart, for in-person learning.

Christy said that before Sept. 8, he would like to bring high school, junior high and elementary school teachers before the board to give them a hands-on demonstration of how online learning will occur.

“Over the next two weeks, all the staff in the district will have been trained on the Google classroom platforms,” Christy said.

He said it is also the district’s goal to eventually have Chromebooks in the hands of every student in grades kindergarten through 12 that needs and wants one.

One concern of parents and educators has been that some students do not have internet access at home, but several businesses, churches and other community stakeholders have “stepped up” and provided WiFi access for students in their parking lots so students can use the computers in their vehicles, he said.

Another issue was parents who have to work until 5 p.m. or later not being able to talk with someone at school when their kids had a problem with a lesson or a computer issue. But he made a commitment to having someone on call from 8 a.m. to 8 p.m. who could either help or get the parent connected to someone who could help with their problem that night or no later than the next day.

An ordinance amendment designed to eliminate tent-dwellers in residential areas was voted down on its second reading Tuesday. The amendment... read more