The Clark County Health Department announced Saturday that a local firefighter has tested positive for COVID-19 and others are quarantined.

According to a press release, the firefighter works for the Clark County Fire Department and is self-isolating at home.

After contact tracing, seven other firefighters are now on a 14-day quarantine and being monitored by the Health Department.

The fire department was able to quickly hire firefighters to fill the gaps and is working with the city department to ensure all emergencies are covered, according to the release. 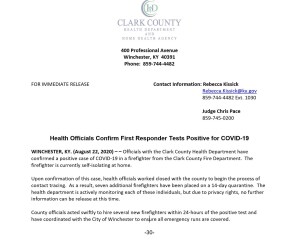 This is the first case involving a local first responder reported by the Health Department, which has reported more than 300 total cases and eight deaths attributed to the virus in the county.

Clark County has reported another death related to the coronavirus. The death of a 49-year-old man was reported Wednesday by... read more