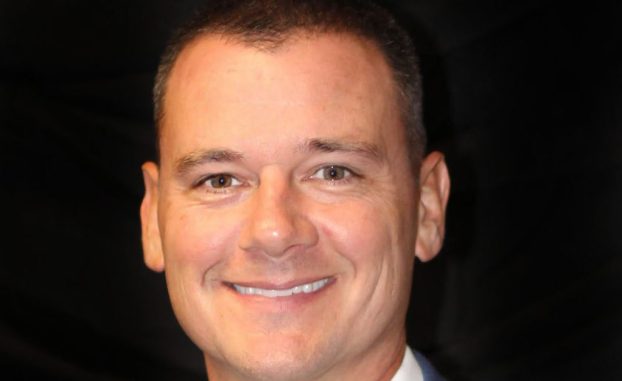 “I’ve been in and around this hospital for 23 years,” Matt Smith said over coffee last Friday.

He was working on his associate’s degree in physical therapy at the University of Kentucky when he did his last student rotation here in 1997. Back then, the hospital was at 1107 W. Lexington Ave.

“I was there three days, and they offered me a job,” he remembered. “I look back on it now, and those were the days that I was starting to grow this passion about patient care.”

Over the years, Smith has held other positions at Clark Regional, including director of physical therapy, assistant administrator and chief operating officer.

He has also been CEO of Professional Rehabilitation Associates PSC in Richmond, and for the past three years had been CEO of Bourbon Community Hospital in Paris, which is owned by LifePoint Health, the same company that owns Clark Regional.

Besides his associate’s degree, he also has a bachelor’s degree in health care management from Midway College and an MBA from Indiana Wesleyan University.

He was involved in the transition hospital’s move in 2012 to its current location at the edge of town on Lexington Road.

He remembers moving the transitional care patients “in the middle of the night” with the help of police and emergency medical personnel, which he described as “a beautifully choreographed dance.”

Now he’s back again, as the hospital’s top administrator.

The third time may be the charm.

“I honestly never planned to come back here,” Smith said, but he believes it was part of a divine plan. “It just worked out. The timing was right.”

And unless Providence leads him somewhere else, he intends to stay.

Smith has been on the job for about nine weeks. And at this point, he sees no need for major changes.

“I would say, expect a lot of the same — and that’s a good thing, because … our quality is top-notch,” he said.

“We’re in the top one, two or three in every single core” by which the hospital is measured, he said.

Clark Regional has a four-star rating by the Centers for Medicare and Medicaid Services, is a National Quality dedicated facility,  and this year is included in the Chartis Center for Rural Health’s listing of the 100 best rural and community hospitals in the country.

Smith said the hospital will keep focused like a “laser beam” on those quality measurements.

During his time as COO here, physician satisfaction for Clark Regional doctors increased from 20 to 90 percent in 17 months.

That emphasis on continuity, however, also includes some big projects on the horizon, including a $4.6 million catherization lab to “fill a gap” in need for Winchester and other communities along the Mountain Parkway, hopefully, by November, and a radiation oncology service. It might be hard to finish that in the next five years, but the hospital already has the certificate of need for it.

The hospital has recently brought on a new cardiologist, cardiac interventionalist and pulmonologist, and is recruiting more professionals.

“We can even offer plastic surgery here; that’s brand new,” he said.

Smith said there is a commitment by LifePoint to bring new services here.

The new CEO is taking over during a challenging time because of the spread of the novel coronavirus.

Fortunately, the “wave of thousands of patients” they were expecting never came.

Because of the governor’s executive order, hospitals had to close in mid-March except for emergency visits and it reopened when the order was lifted. Visitors now have to be screened by having their temperature taken and completing a questionnaire, and safety measures include social distancing and requiring masks.

The hospital stocked up on personal protective equipment and implemented precautions such as limited points of entry.

“We don’t know what the pandemic is going to do,” he said, but he mentioned that the hospital has done 10,000 virtual visits, although telehealth was something the hospital was doing before the viral outbreak occurred in March, and it is here to stay, he said.

“We will continue to leverage technology and keep our eyes to innovation,” he said.

During the partial shutdown, Clark Regional, like other hospitals, had a reduction in services and had to put some medical professionals and other staff on temporary paid medical leave, but as of Aug. 15, Smith said, “everybody’s back.”

And the hospital is growing and reaching out with new clinics and other facilities in its service area.

“We’re excited about that,” he said.

Smith, 46, has two children, Emie Jo, 16, and Cole, 11, and lives in the Hamburg development in Lexington, just a few miles from the hospital.

When he arrives early in the morning to start his day, he likes to come into the hospital from the back.

“You’re facing east, and if you’re here at the right time … the sun is coming up, and it’s a beautiful place,” he said.

Through the last two centuries the property at 31 E. Broadway St. has been just about everything. It’s been a... read more