This pie recipe is from the November 2017 issue of Southern Living magazine. They ran an article titled “Lost Pies of the South.” A few weeks ago, I made the peanut pie from the same article.  Because I still had apples in the refrigerator from a recent trip to the grocery, this was the next pie on my list to try. 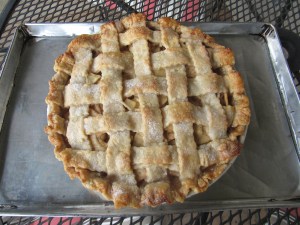 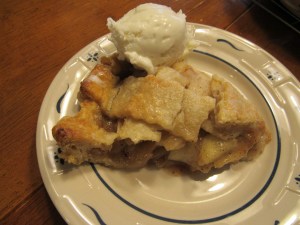 Prepare a double crust (or use two prepared pie crusts from the dairy case). Roll pie crust out to a 12-inch circle. Carefully fit one dough circle into a 9-inch-deep dish pie plate, leaving a 1-inch overhang. Spoon filling into prepared crust, packing lightly to fill the crust. Smooth out filling until even. Do not mound in the center. Sprinkle diced butter over apples.

Place the second crust on a lightly floured surface and roll into a 12-inch circle. Cut dough round into 10 (3/4-inch-wide) strips. Arrange strips in a lattice design over filling; trim strips to be even with the bottom crust’s 1-inch overhang. Fold dough edges under and crimp. Place pie on a rimmed baking sheet.

Bake in preheated oven 15 minutes. Reduce oven temperature to 350 degrees.  Loosely cover the pie with aluminum foil. Bake at 350 degrees until crust is golden brown, apples are tender, and juices are bubbly, one hour to one hour and 10 minutes, removing foil for the last 10 minutes of baking to finish browning crust. Transfer pie to a wire rack and cool completely about three hours.

Of course, I didn’t have any Arkansas Black apples, which the article said is a distinctive heirloom that ripens to a deep red on the tree but transforms to a nearly black hue after a few weeks in storage.  The article said the apples are fragrant, tart and tasty. The recipe said you can use Granny Smith apples if you don’t have Arkansas Blacks, which is what I had on hand.

I love desserts and pies are one of my favorites to make. The first thing I did was make two pie crusts. As soon as the first one was done, I put it in the pie plate and started on the second. I’ve never made a lattice-topped pie so this was a first. After rolling the dough out, I used a fluted knife to cut 10 strips. I covered both crusts with clean tea towels while I prepared the filling.

Peeling apples by hand takes too long and hurts my arthritic thumb, so after running each apple through my handy apple peeler-corer-slicer gadget, I cut the apple slices in half and placed them in a large bowl. I sprinkled on the lemon juice, gave the apple slices a gentle toss and let them sit while I mixed the dry ingredients.

I put the sugar, flour, cinnamon, nutmeg, allspice and salt in a small bowl and stirred to combine then poured the mixture over the apples and tossed them until every slice was coated.

I poured the apples into the pie crust that was in the pie plate and began the task of putting the lattice on top. First, I laid five strips of crust on top then pulled every other strip back to get the lattice work done.

I stepped back and thought it looked pretty good for my first time. Then I realized I had not put the cubed butter on top of the apples before adding the top crust. Instead of trying to undo the lattice work, I just poked the butter cubes between the openings in the crust top and maneuvered some of the butter under the lattice.

I prepared the egg wash and brushed the mixture evenly over the pie crust then sprinkled it with sugar.

I placed the pie plate on a rimmed baking sheet and put it in the oven. After 15 minutes, I lowered the oven temperature to 350 degrees and placed foil on top of the pie to keep it from over-browning. I set the timer for an hour. When it sounded, I removed the foil and let the pie continue baking another 10 minutes to brown.

The pie came out of the oven and smelled wonderful, just like apple pie. Brad and I had already eaten our evening meal and it was almost bedtime, so we didn’t try the pie until the next evening. When we did, I heated up a slice and of course added a scoop of ice cream then dug in. Brad had his at room temperature with ice cream.

This pie was good, but not as good as some I’ve made before. I’ll chalk this one up to another Nailed It recipe but when I think about the best apple pie I’ve made I’ll go back to Brenda Wilson’s Apple Pie because it’s my very favorite.

That recipe appeared in this column back in July 2017 and was article number 71 (today’s article is number 220). Wow, I can’t believe I’ve been doing this that long, time sure flies when you’re having fun.

CONDLEY: Apple dumplings are a big hit with friends

Company was coming (our friend Shiela, who I mentioned last week), and I wasn’t going to pass up an opportunity... read more