BALDWIN: ’Bill & Ted Face the Music’ is most excellent for a positivity boost

Party on, my fellow cinematic dudes and dudettes of Winchester.

Negativity has reared its most bogus head as being the real virus in this egregious year.

We have been sold fear, quarantined, been “gifted” support while jobs and liberties have thieved at the same time and become pawns in a political game of chess that is most heinous.

It’s time like these that we must calibrate our attitudes, mindsets and fill up our fun fuel tanks by revisiting a nostalgia with the current release of comedy, “Bill & Ted Face the Music.”

“Bill & Ted Face the Music” is the long-awaited follow up third installment to the successful and popular “Bill & Ted’s Excellent Adventure” (1989) and “Bill & Ted’s Bogus Journey” (1991). 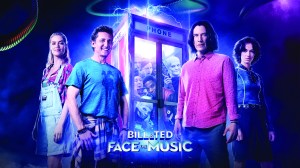 “Face the Music” revisits our favorite Wyld Stallyns, Bill portrayed by Alex (The Lost Boys) Winter and Ted, Keanu (John Wick) Reeves in 2020, now middle-aged coming to terms with the shared failure of not living up to their destinies and creating a song that would bring the world together that they were prophesied to do years before.

Add to their stress of now being man-child fathers to teenage daughters, living with unhappy princess wives and them feeling uncertain that they can live up to the prophecy as time is running out, they are visited by Kelly, Kristen “Flight of the Conchords” Schaal, the daughter of their time-traveling mentor, Rufus, the late George “Dogma” Carlin.

The duo are taken by Kelly to the future to hold court with the Great Leader, Holland “Two and a Half Men” Taylor, where she tells them that they must compose a new song to save the world, not later but now as time is a factor.

Bill and Ted, having some doubts that they can pull off such a feat in such a short time, decide to travel through time to steal it from their older selves.

As they travel around time in an attempt to score their score, their daughters hatch a plan to help their pops to ensure their dads are successful in bringing much-needed harmony to the universe.

Directed by Dean “Galaxy Quest” Parisot, “Face the Music” has had much success since its release and was much needed, especially this year.

“Face the Music” was in talks for more than a decade by the creative team attached, and fans from the earlier installments are owed much credit to its birth as they campaigned most gallantly over the years to bring the lovable goofballs back onto the silver screen.

“Bill & Ted Face the Music” is not the “Citizen Kane” of time traveling comedies by any means, but it never was intended to.

“Face the Music” has a lot of heart, is funny, and unlike other sequels that have seen the stars age and the material weather, Reeves and Winter were a sight for sore eyes and enjoyable to watch because they have a genuine and sincere love for the characters.

As goofy as the duo can be, there are lessons that can be learned.

No matter what the situation, speak positively to everyone you meet.

Rid your being of the tendency to prejudge others and treat them equally with care and respect.

They should have released “Face the Music” Jan. 1, pre-COVID.

Be excellent to each other and have a most film-tastic day!

CONDLEY: No-yeast rolls are easy, but nothing special