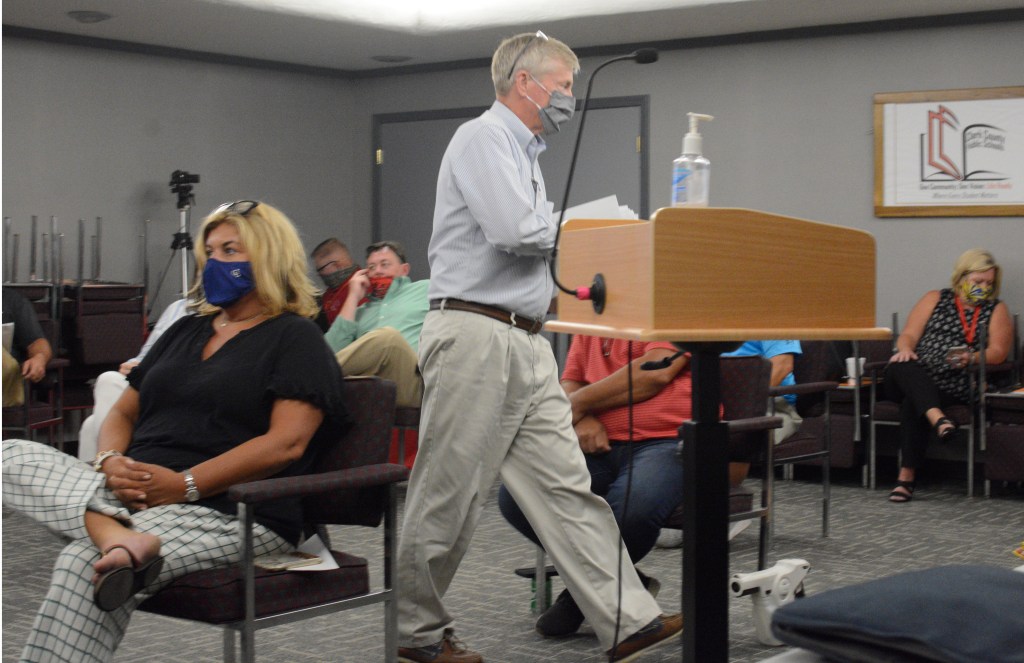 Clark County Board of Education Member Gordon Parido walks out of a meeting Tuesday night after an argument over a discussion of plans for in-person learning.

The Cardinals’ new football stadium will have players on the field and fans in the stands this fall, but crowd capacity will be limited, and strict rules will be enforced to limit the spread of the coronavirus.

Among the rules are that spectators must wear masks at all times and keep six feet apart except for members of the same family, there can’t be any tailgating parties, fans can’t congregate outside the fences on school property, and the visiting team’s locker room may only be used for the bathroom facilities.

During a contentious three-hour meeting Tuesday during which one member walked out over the chair’s decision not to allow a discussion of students returning to classrooms, the Clark County Board of Education voted 4-0 to approve the administration’s plan for a return to fall athletics competition for George Rogers Clark High School and Robert D. Campbell Junior High School with a few changes.

The team sports the policy applies to are football, soccer and volleyball.

During the first of three segments of the season, seating capacity will will be limited to 20 percent, which in the case of the high school football team will mean 1,018. Segment 1 began Monday and runs through Sept. 27 for football and Sept. 26 for the other sports.

The board will decide on the capacity for Segments 2 and 3 at a future meeting, but the administration’s proposal is for them to be at 30 and 40 percent, respectively.

Players, cheerleaders and band members  and their families will have the opportunity to purchase four tickets, and the remainder of available tickets may be purchased online by students and community members.

At the the beginning of the meeting, one of the board members, William Taulbee, asked Board Chair Ashley Ritchie to rule out of order an agenda item to discuss plans for the return of students to in-person classes, which Ritchie agreed to do.

The other board members, Sherry Richardson, Scott Hisle and Gordon Parido wanted the discussion.

The argument became so heated that Parido got up and walked out of the meeting, leaving board members gridlocked 2-2. Ritchie couldn’t even adjourn the meeting because she couldn’t get a majority to do so.

Eventually, the members agreed to only discuss athletics and to hear from members of the audience, all three of whom supported the return of school sports.

The issue was a procedural one. According to Brian Thomas, the board’s attorney, because it was a special meeting, the members couldn’t change the wording of the item on the agenda to remove any reference to approval during the meeting so that members could discuss the issue.

Clark reports 25 new cases in a week while…